05/10/2020 - Stefan Haupt leads us through the labyrinthine roads of Zurich, which, despite undergoing deep change, never ceases to intrigue him

A year after the sumptuous feature film Zwingli [+see also:
film review
trailer
film profile], which earned itself multiple nominations at the Swiss Film Awards and was selected for prestigious festivals including Solothurn, Monaco and Locarno, Stefan Haupt is offering up a cinematographic meditation on his life and, above all, his city, Zurich. Screened in the Gala Premieres category of this year’s Zurich Film Festival, Zurich Diary [+see also:
trailer
interview: Stefan Haupt
film profile] invites the audience to enter into the Swiss director’s private world, to observe through his eyes the changes undergone by the city in which he was born and raised, a city which he still loves today, despite its increasingly tentacular and selfish ways.

After realising “half of his life” was already behind him, the Swiss director decided to make a documentary about the city of his birth, a real and dreamed place marked by memories, life experiences and radical change. Born in 1961, Haupt has never left Zurich, instead absorbing the many changes the city has seen. Zurich Diary takes the form of a film diary where the director becomes a virtual tourist guide, of sorts, leading his viewers through one district to another, from one reality to another. Nestled in the reassuring familiarity of his neighbourhood Kreis 5, once an alternative, no man’s land but now the stomping ground of Zurich’s hipster, bobo (“bourgeois bohemian”) youth, Stefan Haupt reveal his city to us in all its decadent splendour.

Zurich Diary is a highly personal film in which several members of the director’s family make an appearance, including his daughters and his parents, but it also features public personalities along the lines of national advisor Jacqueline Badran and journalist Hansi Voigt, who talk about sensitive topics related to the financial crisis and the (disastrous) growth of the property market. Although Haupt talks about his life without false modesty, Zurich Diary miraculously manages to avoid slipping into sanitized self-glorification by also relating key events which left a searing mark on the city, such as climate change demonstrations and the feminist strike, alongside his own, more personal memories. Reconstructed through his memories of the city, the director’s life is explored from an undeniably political and social perspective, as if wanting to underline the crucial intermingling and inter-influence of the inner world and tangible reality.

Haupt doesn’t claim to be exhaustive or impartial in his film, and therein lies its strength. Zurich Diary doesn’t set itself the impossible goal of explaining the city’s changes or the mutations taking place in an increasingly complex and contradictory society. What it does look to do is offer viewers a point of view, which is inevitably subjective and influenced by personal experience. In this sense, Haupt’s son’s reaction to the film during the shooting process is brilliant and decidedly lucid: “dad, let me tell you something, they’re everywhere those old farts, those straight, white men in power. They try to explain the world to us with all their rules, laws, constrictions. But who decides on the political debate? White men over fifty”. Haupt uses his own personal perspective, fuelled by thoughts and memories, to reveal a confused and frightening yet hugely fascinating and contradictory society.

“It's our responsibility to make this place as good as it can be, and not just for us”

We talked to Stefan Haupt, the director of Zurich Diary, after the film’s world premiere in his home town

Stefan Haupt leads us through the labyrinthine roads of Zurich, which, despite undergoing deep change, never ceases to intrigue him 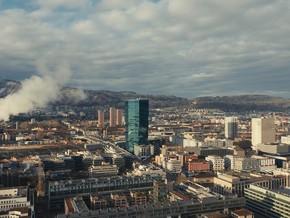 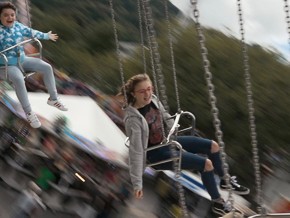