Review: The Origin of the World

Laurent Lafitte, Karin Viard and Nicole Garcia in The Origin of the World

The Origin of the World [+see also:
trailer
interview: Laurent Lafitte
film profile] is the feature debut from actor Laurent Lafitte, pensionnaire of the Comédie Française stage theatre. Having its Belgian premiere this week at the Namur International French-Language Film Festival after receiving the Cannes 2020 label, the film places Jean-Louis, a lawyer leading a comfortable life, in front of what for him represents the ultimate taboo: his mother’s sexuality.

One day as he returns home, Jean-Louis (Laurent Lafitte himself, playing a sophisticated but seriously lost clown) realises that his heart has stopped. Not a single heartbeat in his chest, no pulse, nothing. And yet he is conscious, talks, walks around. Is he still alive? Is he already dead? Neither his friend, the veterinarian Michel (Vincent Macaigne, playing a submissive but wilful friend), nor his wife Valerie (Karin Viard, who confirms once more her comic potential) can find an explanation for this strange phenomenon. While Jean-Louis panics, Valérie turns to Margaux (Nicole Garcia, brilliant as an unexpected authority figure), her life coach and a bit of a guru, not exactly a wizard but nevertheless very connected to occult forces. She has a solution which will place Jean-Louis face to face with the ultimate taboo: the sexual life of his mother (Hélène Vincent, perfect).

Perhaps we can no longer laugh about everything and anything, but clearly, we can still laugh about a lot of things… Here for example, about the story of a (little) boy of 47 who is so afraid to perceive his mother as a woman, that he would rather die than see her sex on a picture. Under its airs as a daring slapstick comedy with a brisk pacing, the film tackles profound existential questions (in sum, “Where do I come from? Who am I? Where am I going?”, the basics of the mid-life crisis) which lead to situations whose violence, symbolic or not, is defused by their absurd face value, generating comedy where drama should appear.

Laurent Lafitte here adapts a successful play by Sébastien Thiéry, and assumes, especially in the film’s second part, a theatrical and efficient structure in tune with the actors playing that symphonie, likewise imbued with a theatrical energy that further feeds into the film’s comedy. We laugh seeing the characters mired into their neurosis, embarrassed by their contradictory emotions, blocked by their anxieties. We are in the domain of the farce, of the parable, with the arrested heart of Jean-Louis, plunged in a purgatory where he is neither alive nor dead, echoes the muted life he leads in which passion has disappeared.

The film also says a lot about the modesty of sons, incapable of seeing in their mother anything other than a maternal or nurturing figure, struck with an extremely powerful blindness when it comes to shaking the symbolic image of the mother to see behind it the woman she is and might once have been. Behind this modesty also lies the weight of family secrets, and the paradoxical way in which the things we do not know still prevent us from being ourselves.

The Origin of the World is produced by Trésor Films and co-produced by 2L Productions, StudioCanal, France 2 Cinéma (France) and Artemis Productions (Belgium). The film is sold internationally by StudioCanal, which will also be handling distribution in France, while O’Brother Distribution will take care of the film’s Belgian release, all of it on 4 November.

more about: The Origin of the World

Interview: Laurent Lafitte • Director of The Origin of the World

"It was an opportunity to talk about a lot of things, with the distance afforded by comedy"

Ana Girardot, Cédric Kahn and Noémie Lvovsky are also cast in the second feature from Isabelle Brocard, produced by The Film, sold by Orange Studio and currently shooting

Rachid Hami is shooting For My Country

Karim Leklou, Shaïn Boumedine, Lubna Azabal, Samir Guesmi and Laurent Lafitte all star in the cast of the filmmaker’s second feature, which is produced by Mizar Films

Blanche Gardin and Laurent Lafitte to star in Everybody Loves Jeanne

Sylvie Audcoeur wraps the shoot for An Ordinary Mother

Karin Viard, Darren Muselet and Samir Guesmi stand out among the cast of this feature debut, produced by Tripode and Incognita, and sold by France TV Distribution 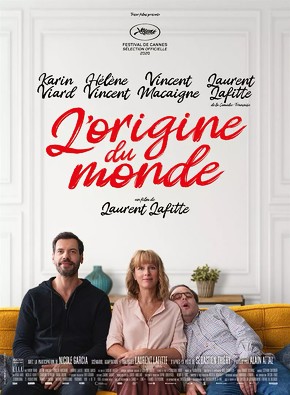