The Czech Film Springboard, organised by the Czech Film Fund and the Czech Film Centre, has grown to become a platform introducing promising new domestic projects in development to international film professionals. The fifth edition focused mostly on new projects by the youngest generation of Czech filmmakers, with Macedonian-born Prague-based director Ivo Trajkov as the filmmaking veteran. Here is our overview of the pitched projects:

A Furious Beauty — Štěpán Altrichter
After completing National Street [+see also:
trailer
interview: Štepán Altrichter
film profile], rising Czech director Štěpán Altrichter was recently attached to direct a new project, A Furious Beauty. The director switches genres with each new project and A Furious Beauty will mark his first encounter with magical realism, via the local folklore of a small-town Catholic festivity. He will be shooting a script penned by talented budding screenwriter Eliška Kováříková, a two-time FAMUfest winner in the category of the Best Unrealised Script, including for A Furious Beauty. The story follows seven days in the life of 15-year-old Eliška who is convinced she can hear “the voice of God.” She shares the same name with her six-year-old sister, her mother, her grandmother, and her great-grandmother, who is celebrating her centenary. All five women find themselves at stages of their lives when they must deal with different issues. “These short but extremely important fragments from their lives will eventually create a picture of a life journey,” says the film’s producer Miloš Lochman, of Moloko Film, suggesting that the five characters may actually represent one person at different stages of her life. The second version of the script has been refined with the support of Scripteast, and the film’s casting is already in progress. The main production phase is scheduled to unfold in the Summer of 2021 or 2022. The producer envisions the preliminary production model as a three-country co-production between the Czech Republic, Germany and France. 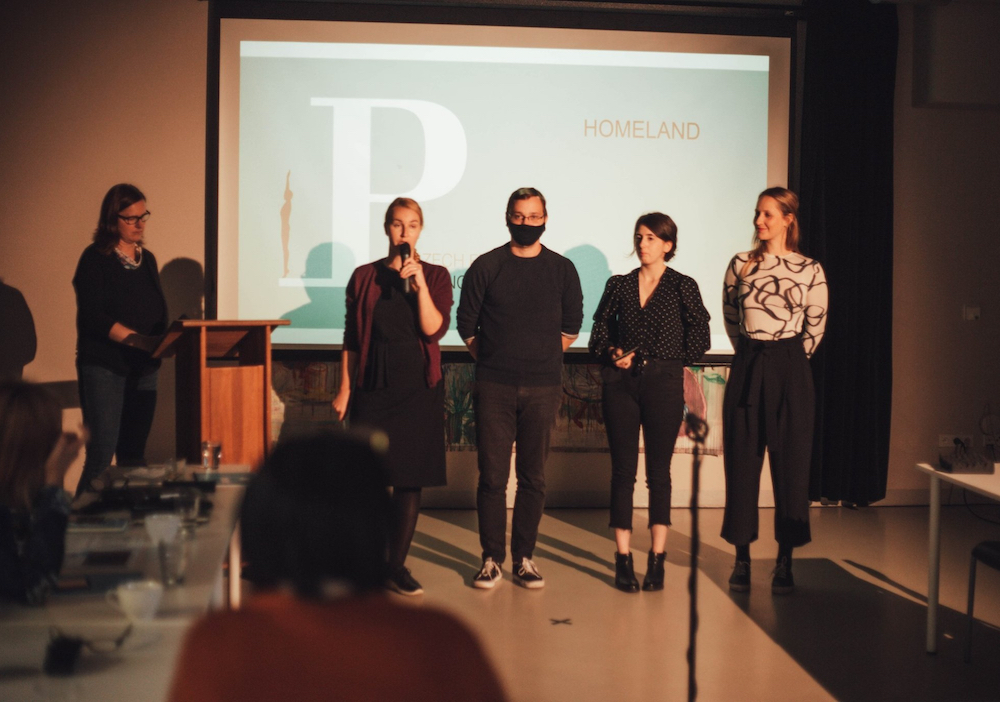 The pitch for Homeland by Marek Čermák

Homeland — Marek Čermák
The producing duo composed of Hana Blaha Šilarová and Karolína Fránková, of young Czech film production company Frame Films, is preparing the feature debut Homeland. Homeland will be directed by young emerging directors Marek Čermák, and will double as his FAMU graduation project. Co-written by Alice Krajčírová – inspired by his childhood experience – the film sees a group of German tourists on their way to visit their former homes, which have been settled in by second and third generation Czech citizens. The locals invite the elderly German tourists into their village just as a celebration of the mayor’s birthday is about to take place. The Czech and German worlds collide and, after the dust settles, Čermák has the opportunity to address injustices of years past and wrongdoings on both sides. Homeland is planned as a drama with elements of dark comedy, as the story “uses humour to depict misunderstandings that could arise between people due to language barriers or cultural differences. Petty conflicts would ultimately evolve into situations akin to that of history repeating itself,” explained the producers. The project, co-produced with FAMU Studio, is expected to go into production in 2022 for a world premiere in 2023. The producers are expecting the project to be a co-production with Germany, Poland, and Slovakia.

Situation of the Priest — Ivo Trajkov
Ivo Trajkov’s upcoming project, Situation of the Priest, is a period drama set in 1969 Czechoslovakia. However, the story weaves together historic events and personal dilemmas following the burial of Jan Zajíc, the second self-immolation martyr after Jan Palach, who also protested against the invasion of the Warsaw Pact armies into Czechoslovakia. The film’s title refers to the the situation of the protagonist, a priest: “the three days in which the Priest will have to deal with the dilemma of faith and the meaningfulness of service to God; the dilemma of love, divine and earthly; a dilemma to help your neighbour, deal with betrayal and devotion,” explains the director, noting that “God is silent” to the protagonist’s questions. Slovakian scriptwriter Marek Grajciar is co-penning the script. In the director’s words, God’s silence is the film’s central theme, and thus, Situation of the Priest is intended as a silent film. The film’s producer Zdeněk Viktora, of SCREENPLAY.BY, called the film “a significant arthouse project.” Principal photography and post-production are scheduled for 2022. Viktora revealed that Trajkov is no stranger to the story of Jan Zajíc, as it was the subject of his first film, biopic drama Jan from 1991, which inspired Situation of the Priest. “After 30 years, Trajkov is returning to the story that began his career,” adds the producer. Czech Film Fund supported the development of the film, which is produced by Zdeněk Viktora of the Czech outfit SCREENPLAY.BY in a co-production between Slovakia and Macedonia.

The Ugly Mandarine — Piaoyu Xie
Piaoyu Xie, who is currently completing a short film called Cicada, has been preparing her feature-length debut, The Ugly Mandarine. Written by Xie, this multicultural same-sex romantic intimate drama is inspired by the director’s own experiences. The project, which deals with the topics of immigration and LGBT issues, won the Coco Award at the 2018 Karlovy Vary International Film Festival and took part in MIDPOINT Feature Launch 2018. Veronika Kührová, who produces the film for Czech outfit Analog Vision, says that production is planned for Spring 2022 with post-production expected to be wrapped in Autumn 2022 for an early 2023 world premiere on the festival circuit. The script’s development was supported by the Czech Film Fund, and the project received Media Development support from Creative Europe. Kührová says they are looking for co-producing partners from France and Slovakia to board the project, while negotiations with an American co-producer are underway. The Ugly Mandarine is not solely a female-centred story, but it is a female-driven project, since women will fill the other roles in the film crew as well. 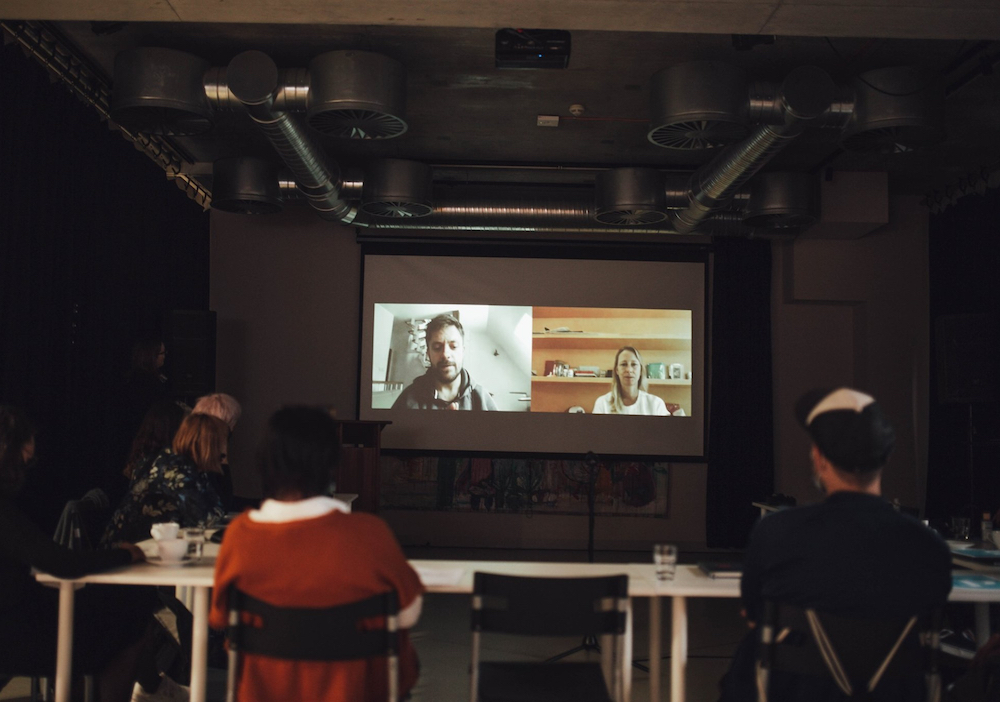 The pitch for Waves by Jiří Mádl

Waves — Jiří Mádl
Jiří Mádl, actor-writer-director from the younger generation of domestic film professionals, is preparing his third feature-length project, Waves. He debuted with a found footage-style coming-of-age family film, To See the Sea [+see also:
film review
film profile] (2014) followed by an intergenerational and intercultural dramedy, On the Roof [+see also:
trailer
film profile] (2019). The emerging writer-director is this time tackling the period drama for this new project. Waves follows the son of political prisoners, taking care of his younger brother. While he does not want his brother to participate in pro-democracy movements, he is recruited into the international section of Czechoslovak Radio. He has to collaborate with the secret police without his colleagues knowing about it. Although the script is based on true events, Mádl decided to fashion the protagonist as an everyman, an ordinary Czechoslovak citizen in a tale with a theme of heroism, “the kind we all could identify with,” he explains. Domestic production company Dawson Productions, which is also behind Mádl’s previous project, On the Roof, will produce Waves. The film is planned to be an international co-production between Slovakia, Lithuania and Germany.