16/10/2020 - Kike Maíllo constructs a sophisticated psychological thriller with an outlook to the murky haze beyond, set mainly in an airport where two unlikely companions are thrown together

Tomasz Kot in A Perfect Enemy

Screening this Friday, 16 October, in the official section of the 53rd International Fantastic Film Festival of Catalonia — battered but undaunted by the pandemic restrictions recently imposed on the region, buoyed by the unfailing support of its legions of loyal fans — A Perfect Enemy [+see also:
trailer
interview: Kike Maíllo
film profile] is an adaptation of the 2001 novel Cosmétique de l'ennemi by the renowned and somewhat divisive Belgian author Amélie Nothomb. As its director Kike Maíllo explained in conversation with Cineuropa just a few days ago (read more here), it’s a fairly loose interpretation of the original text, featuring a lighter style of dialogue relieved of Nothomb’s penchant for grandiloquence.

Best known for the futuristic Eva [+see also:
film review
trailer
film profile], Maíllo has boldly taken on the language of Norman Foster for his latest project. Both the plot and structure of A Perfect Enemy revolve around the verbal jousting between two characters, in a way that is reminiscent of classics like Sleuth (Joseph L. Mankiewicz), timeless thrillers like The Silence of the Lambs (Jonathan Demme) or cult favourites like Fight Club (David Fincher). In this instance, the unlikely duo are a suave, internationally acclaimed architect and a somewhat mysterious young woman.

In the opening scene, we meet Jeremiasz Angust (played by Polish actor Tomasz Kot, also grappling with the English script) at a lecture, signing books and posing for photos with a throng of adoring fans. He sets off for the airport but, caught up in carmageddon, he is waved down by a young woman (Athena Strates) anxious not to miss her flight. What seems at first to be a game of seduction gradually morphs into something darker, more twisted and more dangerous.

Maíllo builds his film moment by moment, illustrating the characters’ stories through narrative leaps and intersecting time lines. This approach injects some lightness and agility into what would otherwise be a barrage of verbosity, as glimpses of a sinister and unwholesome Paris dial up the intrigue. Throughout, the director of Toro [+see also:
film review
trailer
interview: Kike Maíllo
film profile] scatters clues, dates, and troubling details, inviting viewers — who find their allegiances flung constantly from one side to another, like tennis balls — to guess what these two dogged adversaries might be trying to conceal.

The twist comes in the final section, bringing things to a fairly satisfying but highly unusual conclusion: an unexpected coda to a film build on a foundation of guilt, obsession, and the (im)possibility of achieving the flawless linear harmony to which every architect aspires. After all, we all know that, in time, even some exorbitant masterpieces will end up riddled with leaks, cracks and chipping plaster.

A Perfect Enemy is a co-production between Sábado Películas (Spain), Barry Films (Germany), The Project (France) and Hessen-Invest Film (Germany), with support from the ICAA. Parisian agency Pulsar Content will be handling sales.

more about: A Perfect Enemy

“We’ve made a very loose adaptation of the novel”

Kike Maíllo talks to us about A Perfect Enemy, his particular take on The Enemy's Cosmetique by Belgian author Amélie Nothomb, toplined by Tomasz Kot, Marta Nieto and Athena Strates

Lluís Quílez’s second feature is a prison-set thriller and road movie, which begins in mundane fashion but ups the levels of adrenaline and excitement in the second half

Kike Maíllo constructs a sophisticated psychological thriller with an outlook to the murky haze beyond, set mainly in an airport where two unlikely companions are thrown together 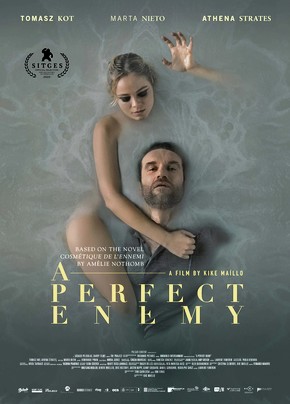