20/10/2020 - Based on a sinister real-life story, Nicolangelo Gelormini constructs his feature debut as a kind of cubist and surreal horror film, seen from a child’s point of view

On 24 June 2014, a seven-year-old girl called Fortuna Loffredo, died after falling from the eighth floor of a building on the outskirts of Naples. A neighbor who regularly abused the child as well as others is held responsible. A little while earlier, another child, in the same place, had met the same fate. How to represent such horror in a film? That is the question pondered by Naples-based director Nicolangelo Gelormini, architecture graduate and former assistant to Paolo Sorrentino, who felt the need to tell this story in his feature debut, and who bravely chose to transform it into a kind of cubist, surreal dark and dreamlike horror story, seen from a child’s point of view.

Screening at the 15th Rome Film Fest, Fortuna [+see also:
trailer
interview: Nicolangelo Gelormini
film profile] is upsetting from its very first sequence: in the middle of the geometries of some popular buildings stands a carousel, from which a little girl is catapulted, like a Martian from a spaceship. A little while after, the same child (Cristina Magnotti) wakes up in her bedroom, and is greeted in the kitchen by her loving mother (Valeria Golino) who heats up her milk, and by her smiling father (Libero De Rienzo). All seems perfect, yet the feeling of anxiety is immediate. Her parents call her Nancy, but her real name is Fortuna; only a friend of hers, who she bumps into in the street, recognises her and knows who she really is. For some time now, the girl has been treated by a distracted psychologist who is anything but empathetic (Pina Turco). What happened to Nancy/Fortuna? Why does she not speak?

The film’s second act reverses the situation. The girl is indeed called Fortuna, while the distracted and harsh woman turns out to be her mother, and the attentive and loving woman her psychologist. From here, the viewer is asked to put the pieces back into their rightful place and to recompose a puzzle which only becomes more disturbing as the film goes on, unraveling in the meanders of degraded suburban barracks, among the murky looks of adults, the connivance of disturbed parents and the flights of fancy of children, necessary to bear such obscenity and filth. The tale of a princess come from another planet and fighting against the Giants is intertwined with a frightening reality which, in its staging, comes close to the horror film, with sudden apparitions and a constant feeling of anguish, and where the unspeakable takes place off-screen, in a dark space the viewer is free to fill in as they wish.

With its fragmentary and dreamlike structure, Fortuna seems to reproduce the gaze of the child on her intolerable everyday life, so ugly that it cannot be represented. The director, together with co-writer Massimiliano Virgilio, decides to give his unfortunate protagonist a second chance, thanks to cinema, creating a surreal, complex, risky film that will divide audiences, but whose emotional impact is undeniable, and which requires some time to settle down and be understood.

Fortuna is produced by Dazzle Communication with Indigo Film and Rai Cinema, with the official patronage of Save the Children. Sales are handled by True Colours.

more about: Fortuna – The Girl and the Giants

Interview: Nicolangelo Gelormini • Director of Fortuna – The Girl and the Giants

“My aim was for viewers to feel the same sense of discomfort, bewilderment and uncertainty as the protagonist”

Based on a sinister real-life story, Nicolangelo Gelormini constructs his feature debut as a kind of cubist and surreal horror film, seen from a child’s point of view 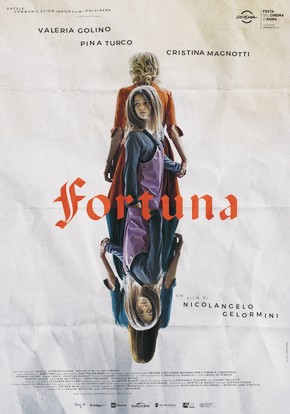