20/10/2020 - A surprise nominee for the EFA Discovery Award, Nermin Hamzagić's first feature is a convincing and scathing look at Bosnian society

In his first feature, Full Moon [+see also:
trailer
interview: Nermin Hamzagić
film profile], just nominated for the EFA Discovery Award, Bosnian filmmaker Nermin Hamzagić uses the tried-and-tested approach of dissecting the problems and injustices of a society through the prism of one of its key tenets in a limited time period. This time, it is a police station over the course of one night (with a full moon).

Hamza (excellent Kosovar-born actor Alban Ukaj, who won the Award for an Outstanding Actor for this role at Cottbus) is an inspector in the Sarajevo police, and the film starts with his wife, also his senior, going into labour. As they arrive at the hospital, he is called by his supervisor on duty, Jasmin (Ermin Sijamija), to come to cover the shift, as no one else is available.

Hamza arrives in the precinct and will spend the rest of the night there, handling various cases that exemplify the many problems of the troubled, divided, justiceless country. But the way the film develops is better than this description makes it sound. What could have turned into another didactic, moralistic exercise actually becomes a character study of the protagonist, his hometown and his homeland.

A street peddler arrested after refusing to pay racket money to one of Hamza's co-workers, a man with a cancer-stricken child who uses his car to yank an ATM out of the wall so he can pay for the necessary surgery (a heart-breaking turn by Boris Ler), an underage girl caught providing sexual favours to an old man in a car park – these characters serve to show how an unjust society that does not care about its regular citizens can turn an essentially decent person into a criminal. But thanks to the convincing, albeit traditionally structured, screenplay (co-written by Emina Omerović) with dialogues that mostly manage to avoid sounding over-contrived, as well as to the director's meticulous work with the actors, each of these stories resonates on its own merits.

Full Moon's topic is very susceptible to Bosnian cinema's frequent pitfall of over-the-top sentimentality, which Hamzagić must have been well aware of. This is why these straightforward problems are offset by nuances that break with the potential black-and-white presentation: Hamza has also been benefiting from extortion (which is how he paid for his wife's IVF), one of the prisoners is a truly violent criminal, and our hero's acts of kindness are punished, rather than rewarded, again and again.

If there is one misjudged element in the film, it is the appearance of a young boy inexplicably present in the precinct in the middle of the night, and whom only Hamza seems to be able to see. He could represent a guardian angel, a personification of conscience or a reminder of the hero's younger, more innocent self – but regardless of what the idea is, it does not play out much beyond the dissociative feeling of having a blond-haired kid in a bright-yellow raincoat hang around the dark precinct in the middle of the night.

We spoke to Nermin Hamzagić, who is competing at the Zagreb Film Festival with Full Moon, a socially aware thriller that is also nominated for the EFA Award in the European Discovery competition

Madly in Life triumphs at the Bergamo Film Meeting

The movie by Belgian directors Raphaël Balboni and Ann Sirot was crowned the audience’s winner, while Tailor and the documentary Lobster Soup also bagged awards at this 39th edition of the event

From 23 April, the festival will offer over 150 films in streaming, homages to Volker Schlöndorff, Mia Hansen-Løve, João Nicolau and two industry days

A surprise nominee for the EFA Discovery Award, Nermin Hamzagić's first feature is a convincing and scathing look at Bosnian society 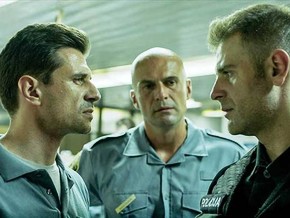