Karl Holt in Benny Loves You

Toys come and go. A teddy bear is for life. Jack, the protagonist of Karl Holt’s Benny Loves You, in Official Selection at the Trieste Science+Fiction Festival, knows this well. Played by the director himself – who is also behind the script and the editing – Jack is a 35 year old toy designer from London and a total loser who still lives with his parents in the Hertfordshire countryside. He is also being stalked by the bloody teddy bear he has kept since he was a baby and which is insanely jealous of its owner.

Benny Loves You is a horror film from the haunted doll movie subcategory, a series that probably started with the Zuni fetish in the third episode of the Trilogy of Terror, directed by Dan Curtis in 1975, continued with Chucky in the cult film Child’s Play, and led up to the recent Annabelle trilogy. What characterises Holt’s film, like many genre films, is its effervescence tempered by a good dose of humour (black, of course). Benny Loves You, in short, can be appreciated by those who clap enthusiastically in theatres while the villain sucks up the internal organs of the victim with a vacuum cleaner equipped with a Hepa filter, and then exclaims “tah dah!”

After a disastrous birthday during which his parents self-annihilate in the most comical fashion, Jack remains alone and has to sell the family house. In the meantime, he is also downgraded to junior designer by the exigent boss of Toy Box, Ron (James Parsons), who doesn’t like Jack’s project of a dancing robot toy (Jack has inappropriately called it A.I.D.S. – Artificial Intelligence Disco System), preferring that of his colleague Richard (George Collie). Jack decides to change his life and to become a man; he buys a manual for success dedicated to losers and throws away all the old gadgets that crowd his room – including Teddy. A flashback shows Jack’s mother offering a teddy bear called Benny to her child and whispering to him “his mission is to protect you, even against the demons inside the closet.” Benny (designed by Karin Jehl) is a coral-red bear with a blue vest, a crocheted nose and golf ball eyes. And, unfortunately for Jack, he has come to life and wants to go scorched-earth around him. The first to be tortured, gutted and decapitated is the man at the bank who forced Jack to sell his house. While the two stupidest policemen in England (Anthony Stiles and Darren Benedict) investigate the disappearance, Jack takes inspiration from his terrible bear and designs a line of scary puppets, the Skare Bears, which Jack’s boss truly likes (they are called Spook Luke, Stabby Abby, Bad Vlad and Mother T’Razor, with the latter being a plush nun). Jack becomes a hero and wins the heart of his colleague Dawn (Claire Cartwright), while Teddy continues the massacre by first killing the boss’s dog, then the boss himself, to then hunt for Dawn (he writes on the wall, making a little mistake, “Birthy Ditch”).

Parodying the Muppets, Norman Bates and countless slasher movies that have entered our imaginary, Karl Holt (who will participate in the upcoming The Pandemic Anthology) shows an irrepressible creativity, especially in the hilarious final showdown between the robots and Benny, who has turned himself into a ninja. John Bowe must be commended for the cinematography and the sound design. The actors clearly have fun in this bloodbath and Benny, despite the fixity of his gaze typical of toys, manages to express emotions (love, love, kill, kill). We laugh at the intelligence of the jokes and situations, and Benny Loves You would seem to be almost a representation of low-budget cinema, which requires so much imagination with little means.

The film is produced by Darkline Entertainment, while international distribution is handled by Raven Banner (Canada).

more about: Benny Loves You 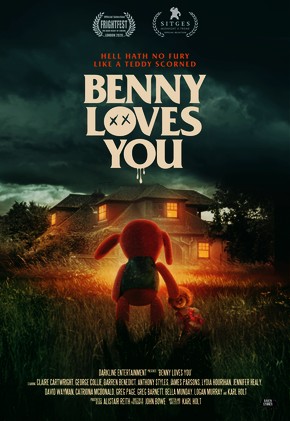