10/11/2020 - Ruth Meehan’s film is a pleasant dramedy, rich in brilliant moments and able to treat a delicate topic with depth and courage

Gemma-Leah Devereux in The Bright Side

One of the world premieres of this year’s Cork International Film Festival (8-15 November) was that of Ruth Meehan’s debut feature The Bright Side. The dramedy, penned by Jean Pasley and the director herself, was inspired by Anne Gildea’s memoir “I’ve Got Cancer, What’s Your Excuse?” and follows the vicissitudes of a thirty-something stand-up comedian called Kate McLaughin (played by the versatile Gemma-Leah Devereux, who recently appeared in Paddy Slattery’s crime flick Broken Law [+see also:
film review
trailer
interview: Paddy Slattery
film profile]). The woman spends her days almost apathetically and tries to find meaning and direction in life. She has developed a troubled relationship with her mother and her late father, but seems to be in more peaceful terms with her brother. One day, a shocking news seems to disrupt Kate’s existence even more; she is diagnosed with breast cancer and, after a clumsy but still risky overdose attempt, she reluctantly decides to undergo chemotherapy.

The whole film is based on a constant “caress and punch” mechanism, well oiled thanks to brilliant – and expertly balanced – writing and the lead actors’ excellent interpretations. While one scene seems to entertain and please the viewers, the next one is most likely ready to hit them hard, with no sugarcoating or consolation. This mechanism works very well and engages the audience in following Kate’s evolution, at first armed with staggering levels of cynicism and black jokes and getting off to a bad start with the four other women she meets on the chemo ward. This peculiar “golden mean” strategy confers great credibility to the narration and proves to be a successful approach in tackling the cinema adaptation of such a complex theme.

The four women accompanying Kate in her journey are Tracy (Siobhán Cullen), Fiona (Karen Egan), Róisín (Barbara Brennan) and Helen (Derbhle Crotty). All of them, with their own troubled backstories, reflect different reactive and adaptive approaches to the condition. Ultimately, the group tries to stick together while fighting their battle. Extra care seems to have been employed in developing Kate’s character, and this is particularly evident through her original sense of humour, her impulsivity and many other details, such as her numerous wig changes, adapting to her mood or the context she is in, or her monologues with her breasts. More generally, the theme of femininity is explored by Meehan with tact and sensitivity, but still leaving some space for effective punch lines and wit. In terms of formal qualities, Kate’s state of uncertainty is well rendered through the gloomy cinematography lensed by JJ Rolfe (Dublin Oldschool) and the atmospheric score composed by Stephen Rennicks (Death of a Ladies’ Man).

All in all, Ruth Meehan’s debut tells a moving and uplifting story of courage, and does it with no artifice. The narration is simple and rich in feel good vibes, but gives the right depth to its characters and provides an organic conclusion to Kate’s vicissitudes.

The Bright Side was produced by Dublin-based outfit Playground Pictures.

more about: The Bright Side

Ruth Meehan’s film is a pleasant dramedy, rich in brilliant moments and able to treat a delicate topic with depth and courage 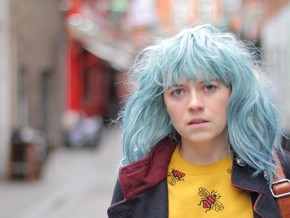