13/11/2020 - María Pérez Sanz signs her name to a calm, intimate and rather down-to-earth portrait of the Danish writer Isak Dinesen, which is a far cry from the character we all know from Out of Africa

The African continent we see in Karen [+see also:
trailer
interview: María Pérez Sanz
film profile] isn’t actually Kenya, with its savannahs, its waterfalls and its wide-ranging fauna rife with elephants, gnus, zebras and ferocious lionesses. In this instance, thanks to the magic of film and the enthralling audacity of director María Pérez Sanz, the Africa we’re presented with can be traced back to the hen-pecked soil of Extremadura in Spain: a region on the border with Portugal where this feature film lasting little more than 60 minutes was shot; a land whose staggering grasslands rival those of the Serengeti National Park. The director had already explored the rich landscape of her native Cáceres in her first feature film, the documentary Malpartida Fluxus Village [+see also:
trailer
film profile] which was shot in the German artist Wolf Vostell’s fascinating open-air museum, and she is now renewing her deep attachment to the land with a film which was presented in a premiere within the 17th Seville European Film Festival’s Official Selection, and which stars the singer-songwriter Christina Rosenvinge in its lead female role.

It was the process of writing two songs for the film’s soundtrack (which sees John Barry’s violins overwhelmed by an aeroplane flying over picture-postcard sunsets) - as she also did for films such as Todo es mentira and La pistola de mi hermano - which kick-started Rosenvinge’s relationship with the Cáceres-born director. Out of this musical collaboration was born the idea that the artist might also step in front of the camera, breathing life into a Danish national, like herself, named Karen Blixen and known by the pseudonym of Isak Dinesen, in this film which explores the most private, domestic side of a woman who hid behind her own legend.

It’s for this reason that the humanist film Karen opens onto the wide, diaphanous and immeasurable landscape before gradually drawing closer to the protagonist’s house, to her fire and to her day-to-day activities such as eating, relaxing or paying her employees. Only three human beings appear in this microcosm: Karen herself, to whom Rosenvinge lends her naturalness, beauty and elegance, not to mention her photogenic nature, reminiscent of classic divas like Lilian Gish or her contemporary counterpart Nicole Kidman; Karen’s Somalian servant Farah Aden, played by the North American actor settled in Madrid and boasting a strong voice and presence Alito Rodgers Jr. (Remember Me [+see also:
film review
trailer
interview: Martín Rosete
film profile]); and a friend of the writer, played by Isabelle Stoffel (The August Virgin [+see also:
film review
trailer
interview: Jonás Trueba
film profile]). Vested with symbolism, the dialogues they share come to form the film’s modest plot, allowing the viewer to read between the lines in order to root out what it is that unites them, separates them and troubles them.

Through these everyday actions and conversations, we finally (re)discover the person of Karen Blixen rather than the figure sat atop a hallowed pedestal. We learn, for example, about the faith she had in her partner, the complicity between them, her wild and modern nature, her faith in Destiny, the only god she believed in, which encouraged her to dedicate her life to a far off land which she was hopelessly in love with... much like María Pérez Sanz is besotted with hers.

"I dive into the daily life of legendary figures"

Spaniard María Pérez Sanz is competing at Seville with her second film, Karen, an intimate portrait of the day-to-day existence of famous author Isak Dinesen

“Every people still has its cross to bear”

The Spanish filmmaker is competing for the Tiger Award at Rotterdam with her feature debut, which won prizes at post-production forums and secured the support of Lluís Miñarro

The feature debut by Romania’s Eugen Jebeleanu, hinging on LGBTQ+ issues, has gone home with the top prize from the 11th edition of the D’A Film Festival Barcelona

Barcelona's 11th D'A Film Festival will run from 29 April to 9 May, adopting a hybrid format combining an online programme with screenings in both Barcelona and Madrid 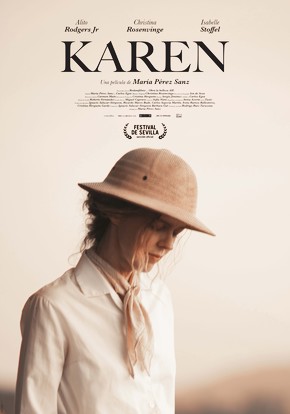