10/12/2020 - Ramón Luque delivers a big-screen adaptation of Shakespeare’s As You Like It without any particular cinematic merit, but still conveying a message of joyfulness and the desire to live life to the full

An ancient theatre – where a group of actors are rehearsing a play by William Shakespeare, as the director talks on the phone in the stalls or mulls over a possible budding relationship with a younger man – and a forest in bloom, where those same thesps perform the aforementioned show, are the only settings in which the action of Rosalinda [+see also:
trailer
film profile] unfolds. The movie is an adaptation that Ramón Luque (a film teacher, producer and director of three previous films: El proyecto Manhattan, Hollywood and Lavapiés) has made of the light-hearted comedy As You Like It, penned by the genius English playwright in 1599.

The lead character is the titular girl, Rosalind (played by Olivia Gablivi, whom we saw recently in Zoe Berriatúa’s Los héroes del mal [+see also:
film review
trailer
film profile]), a determined young woman who has been cast out of the palace: an enclosed space where shadows and intense lighting create images that are simultaneously beautiful and dramatic. Revelling in the sun and the freedom she enjoys in the Forest of Arden, she will do her utmost – in collusion with her loyal friend and cousin Celia (Elena Furiase), and her foul-mouthed and mischievous buffoon Petra (Rut Santamaría) – to win the heart of the somewhat scatterbrained Orlando (Diego Landaluce), who has a tense and violent relationship with his older brother.

And so, once again, here we find all the staples of the most playful and joyful side of Shakespeare’s oeuvre: love games, the passing of time, witty dialogue, transvestism, romantic courtship, the crazy things that people end up doing for the ones they desire, collusion between buddies and sexual misunderstandings. With minimal resources, a wardrobe combining the ancient and the modern, a faint feminist aura and a batch of conversations involving various unexpected modern-day expressions, Rosalinda places the passion, beauty and rashness of youth side by side with the more mature, composed and slightly despondent facet of emotional experience, represented by the aforementioned theatre director, who is brought to life by seasoned actress and casting director Laura Cepeda.

This movie is out-and-out filmed theatre and therefore comes with all that entails in terms of recitative and, at times, artificiality (and artifice), something that the recent HBO series Escenario 0, devised by actresses Bárbara Lennie and Irene Escolar, also suffered from, for example. It’s only the revisited text by the author of A Midsummer Night’s Dream, which never loses its relevance or vitality, and its lyrical musicality that manage to hold the viewer’s attention as the film unspools, ending with an epilogue (in which the characters break the fourth wall) that urges us to live life to the full. Because, as the great Spanish artiste Lola Flores, infamous around the world for her dramatic outbursts and temperamental character, once said: “If you’ve never experienced true passion, you’re nothing but a little shit!”

Rosalinda, peppered with songs by British composer Matt Gunston, is an independent production by Proyecto Manhattan and Clapham Films. It is released in Spanish theatres on 11 December.

Ramón Luque delivers a big-screen adaptation of Shakespeare’s As You Like It without any particular cinematic merit, but still conveying a message of joyfulness and the desire to live life to the full 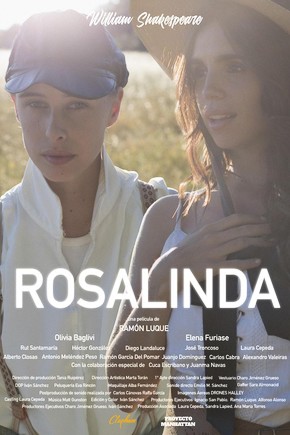