Review: Nheengatu – The Language from the Amazon Forest

15/12/2020 - The DocLisboa opener, documenting a journey down the Rio Negro, proves that every filmmaker wants to be Werner Herzog when they grow up

Just like his thick-accented colleague before, José Barahona can't resist the call of the Amazonian forest in Nheengatu: a Brazilian-Portuguese co-production which had its world premiere at DocLisboa and heads out in the search of a language that didn't exist before 1500. Based on the Portuguese and the indigenous Tupi language, Nheengatu used to be, it is said here, “a language of the conquerors and now it's the language of resistance”. It's a catchy statement, but as the trip goes on, it becomes obvious that the people Barahona meets view it in different ways, using it proudly or dismissing it as something only elders use, already on its way to extinction. In any case, it certainly is more than a catchy statement.

Then again, Barahona doesn't seem to be that interested in anything overly simple, deciding not just to shoot what he sees, but to shoot with the indigenous communities he encounters – suddenly armed with a smartphone and left alone to document whatever they want. Such role-reversal is understandable: he wants them to tell their own stories and feel in control, but visually, it's a tiring approach. Not helped by his confusing insistence on appearing in most shots anyway, usually while holding that damn phone or standing next to the boom operator. Perhaps this is just one of those stories that should be told by someone with deeper roots to the place, rather than by another “white man”, as most of the people here keep calling him.

Shot in about a month, the film is dramatically overlong, but luckily provides some atmospheric flashes – there is something almost hallucinogenic about listening to these unknown words, repeated indifferently into space, while heading down the Rio Negro alongside the increasingly tired crew. And yet things quickly move beyond the realm of linguistics, as the people Barahona meets discuss everything from personal tragedies to drinking, the current political situation and even evangelical assemblies.

However, those subjects do not always talk about their lives as willingly or as readily as they mock the crew, and never before agreeing on the terms of their conversation first. Indeed, as one of them points out, “the shooting is a favor” and they want to be paid. And frankly, they might have been burnt before. “They are going to film you and say: 'Look at the native drinking coffee'” – the neighbors joke with one older lady after her interview, and while certainly funny, their words also ring very true. There is no denying the curiosity and empathy exhibited here. But for all the director’s efforts and all the smartphone-switching, the outsider's gaze still prevails.

Directed by José Barahona, the film was produced by Carolina Dias, co-produced by Fernando Vendrell. A production from Refinaria Filmes and David & Golias.

more about: Nheengatu – The Language from the Amazon Forest

Review: Nheengatu – The Language from the Amazon Forest

The DocLisboa opener, documenting a journey down the Rio Negro, proves that every filmmaker wants to be Werner Herzog when they grow up 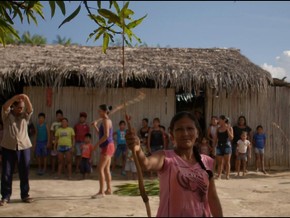