16/12/2020 - Following an investigation led by a group of high school students within their local area, this documentary throws light on a growing awareness of the pros and cons of economic development

Traffic snarl-ups, the continual rumbling of engines, roundabouts in abundance, bypasses which lead to the depopulation of town centres, sprawling shopping centres… "it reminds me of an anthill. All these places which we’ve grown up with and which gradually become a part of us. Fast food restaurants, ridiculously expensive clothes brands…" When you’re 17-years-old, your view on major planning projects and their impact on your future within your immediate environment is anything but clear, especially when you live in an area on the outskirts of Paris which is both economically disadvantaged and decimated by the press. It is this growing awareness, this awakening of the younger generation, which is examined in Geoffrey Couanon’s documentary Douce France [+see also:
trailer
film profile], a film presented in the Moving Mountains section of the 12th Les Arcs Film Festival – the Digital Off-Piste edition - ahead of its French release on 24 February, courtesy of Jour2Fête.

"EuropaCity is the biggest, if not the most exaggerated project of this kind in Europe, a complex comprising 230,000m² of shops, theatres, a water park and even an artificial ski slope. It’s said that it will swallow up 280 hectares of good farming land on the outskirts of a city which is already losing 2m² of natural areas every second". It’s 2017 and we’re in Villepinte, where high school students Amina, Sami and Jennyfer have been entrusted with an investigation by their history-geography teacher, which consists of "understanding the local land": "if the Triangle de Gonesse is going to be developed, you’ll be potential clients or workers, so it does concern you directly."

Thus, our novice investigators, initially driven by naivety, but also by curiosity and the lack of prejudice typical of their age, find themselves embarking on an exploration which will open their eyes on the matter, and notably to the fact that the most fertile agricultural plain in France (which is under threat from the progressive concretisation of the land) is only located 20 minutes from their homes.

Public meetings, appointments with local MPs and EuropaCity project heads who stress the advantage of future job creation, the €3m-worth of investments involved, the favourable impact the project is expected to have on tax revenue and on property values in the local area… Our three detectives learn all about it, not least how to read between the lines of positivist political-economic newspeak and how to halt the attempts made by several of their interlocutors to treat them like easily manipulated, small-fry commodities. Increasingly discerning and incisive in their questions, they slowly come to form their own opinions, off the back of street interviews with local residents, shopkeepers and youngsters their own age, but also through their immersion in the agricultural world and in ethical consumption cycles. Their investigation is likewise rich in (animated) debates between our protagonists; it takes them as far as the French National Assembly and ultimately feeds into their own personal plans for the future.

A multi-layered portrait, Douce France is a documentary which gains in depth as the understanding of the film’s protagonists grows. It covers a huge number of questions essential to the present and future lives of France’s young people. After years of citizen activism, the French government ended up abandoning the EuropaCity project. But a new urban planning project is now under review, and the film is a perfect illustration, both subtle and humble, of the vital importance of information, of active thinking and of collective, open debate in our development as individuals, but also in our conception of a shared, socially engaged future.

Following an investigation led by a group of high school students within their local area, this documentary throws light on a growing awareness of the pros and cons of economic development 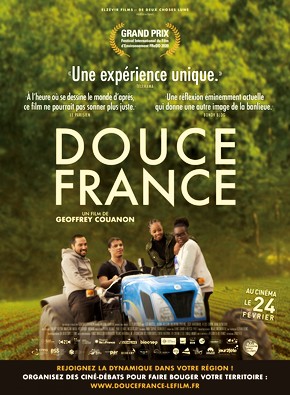 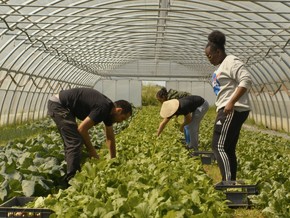