Watching Sideshow, which is having its World Premiere in the Midnight Section of the Cairo International Film Festival, feels a bit like finding a message in a bottle washed up on a beach: Adam Oldroyd’s feature debut has the look and feel of a relic from the bygone age of 1970s British television. A blackly comic thriller centred on a laughably inept robbery attempt on a washed-up psychic, the film has a deliberately retro aesthetic.

Sideshow stars the well-known but slightly unfashionable British television personality and comic Les Dennis, who presented the UK version of the quiz show Family Fortunes for 15 years, until 2002. Dennis isn't without acting chops, and in recent years has populated enormous long-running West End shows such as Chicago, Art and Spamalot. He brings the theatrical acting style required on such big London theatre productions to his Sideshow character Pendrick, a.k.a ‘The All-Seeing Stupendo.’ His dramatic flourishes and big gesticulations are the right fit for a character who has spent his life performing on stage. Unfortunately, Pendric is also an unreconstructed misogynist with his best days as a stage performer well behind him, a fact he is well aware of and which has made him miserly. These days, Pendrick even struggles to draw crowds at British seaside resorts to watch him (he would be the perfect performer for corona times, always leaving vast rows of empty seats between audience members). He therefore tries to get his kicks in other ways, such as trying to bring the most voluptuous unattached woman in the audience onto the stage.

Luckily for the crowd, Pendrick’s manager/agent is on hand to try and keep him away from trouble. Gerald (Anthony Head) feels a sense of obligation towards him, because his own father used to look after the performer when he was more successful. These days, Gerald has to call in favours in order to get Pendrick booked.

In the audience is Eva (April Pearson), a young lady who seems out of place in the crowd. At the end of the night, as audience members scream for their money back, it is revealed that she is a robber, convinced that the conniving Pendrick also has a secret stash of cash. To help her with the robbery, she's enlisted the help of Dom (Nathan Clarke) who is a gullible dim-witted soul. When he finds out that Pendrick is a psychic, Dom immediately grows apprehensive, despite all the evidence that Pendrick’s talent is nothing more than a con. It's an enjoyable introduction to the characters, with fun, albeit intentionally hokey, dialogue.

Unfortunately, the film does not leave them much room to grow and no psychic abilities are required for anyone to see where this story is going. The reveals about serial killers and family secrets are so telegraphed that one would have to be as dim-witted as Dom not to foresee them. But the film has enough self-awareness about its own retro style and the goofiness of its plot for Oldroyd to keep it on the right side of fun. It would be interesting to see what this director, who has a background in wildlife documentaries and children's programs, would do with a larger budget allowing for more ambition. 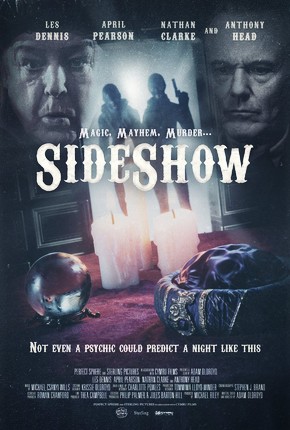