One of the most mesmerising animated features in many a year, Flee [+see also:
trailer
film profile] uniquely documents an Afghan refugee’s harrowing attempts to find asylum abroad, his journey anything but a linear progression. Danish director Jonas Poher Rasmussen finds remarkable means to unearth the memories of his protagonist, Amin, congealing them into something akin to a classic suspense tale, yet one still rooted in documentary credibility. A 2020 Cannes Label selection, Flee waited half a year to have its full premiere in the World Cinema Documentary Competition at this year’s Sundance, where it has been one of the most admired films at the whole festival, as well as at the Göteborg Film Festival.

One of the most subtle of this film’s many great flourishes comes in the opening minutes, as Amin (a pseudonym, as with all the other main characters, to protect his anonymity) lies down on a plush couch as he prepares to narrate his grand tale to Rasmussen. Then, just as we in the audience are similarly settling down, a film clapperboard hovers in the corner of the frame; the two main characters giggle and restart the scene. And this is all rendered in hand-drawn animation, with the slanted lines and imperfections of someone’s sketches. What reality are we in here? Yet subjective reality and the nature of our perceptions are indeed one of this feature’s key concerns. The masterstroke of using animation to, literally, illustrate Amin’s story is that its colourful splendour and spatial exaggerations bring us closer to the feeling of actually “accessing” memory, a bit like the colour-coded levels of reality in Christoper Nolan’s work.

Unlike many migrant narratives in contemporary film, Flee takes place at an earlier historical instant – the latter stages of the Afghan-Soviet War in the late 1980s – where citizens escaping became a necessity, although the affinity with the modern refugee crisis is obvious. Amin (here, in his early teens) initially decamped from Afghanistan, along with his frail mother and three older siblings, to Russia, the only country that would take them. Yet this is merely a temporary solution, with their Russian visas expiring and the country in turmoil after the fall of communism. The main bulk of the film follows Amin’s progressively hapless and Kafkaesque attempts to settle in a more secure Western European country. Yet a person is not solely defined by their political status, and a key story thread is Amin’s burgeoning queer sexuality; we see his struggles to conceal this from his family, and alternately how he explores his urges in private and with people of his own age.

The animation, provided by Copenhagen-based Sun Creature Studio, doesn’t distance us from the visceral events unfolding. The initial tracks around early 1980s Kabul are a feast of colour and lush detail, all soundtracked self-referentially to A-ha’s “Take on Me” – which, of course, had a famous animated music video. Then, the labyrinthine streets of Saint Petersburg look perennially like a mass riot has taken place in them every day, and there’s a seaborne sequence with an enormous passenger vessel that is awe-inspiringly atmospheric.

The impetus for the film came from the director and lead participant’s friendship – they met as high-schoolers, and Rasmussen was always curious for him to relate exactly how he ended up in Denmark. Most of us have a close friend we know whose life would make a wonderful subject for a film. This time, Rasmussen actually went and made that hypothetical movie, and it is a gift.

Flee is a co-production between Denmark, France, Sweden and Norway. The producer is Final Cut for Real, while further production companies involved are Sun Creature, Vivement Lundi, Most Film, Mer Film, executive producer Left Handed Films, and Vice Studios. Its world sales are handled by Cinephil. 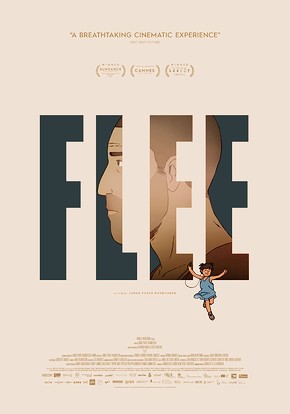