Review: Misha and the Wolves

02/02/2021 - In his World Cinema Documentary Competition entry, Sam Hobkinson shows that when something seems too good to be true, it usually is

“I have been living in a state of enormous guilt and anxiety for the past year. Not because I felt like I was doing something wrong, but because I was always afraid of being found out,” says Melissa McCarthy's Lee Israel in another tale of literary forgery, Can You Ever Forgive Me? Whether it's a sentiment echoed by one Misha Defonseca, who in the 1990s fooled the world with her Holocaust memoir that was later revealed to be a fake, isn't really answered in Sam Hobkinson's Misha and the Wolves [+see also:
trailer
interview: Sam Hobkinson
film profile], screening in Sundance’s World Cinema Documentary Competition. But he does seem to have fun unwrapping the scandal that made so many people very, very angry.

They’re angry mostly because, well, they were duped and others got to see it as well – most of his interviewees still seem genuinely embarrassed by their naivete. Defonseca, a Belgian immigrant who made it all the way to Massachusetts, claimed that she was separated from her Jewish parents during the war and then tried to find them on her own, hiding from the Nazis in the wilderness, with no one but a pack of wolves for company. So far, so Jungle Book, and yet it has immediately struck a nerve. Listening to this cacophony of voices, wondering aloud how they could have possibly believed her, can get tiring; “Why wouldn't they?” would be a more appropriate question. Believing in preposterous claims is everyone's daily activity, and when even Whitney and Mariah assure us that “there can be miracles” when you do, why stop? Even if it leads to later apologising to Anderson Cooper for thinking he liked to eat babies.

Once she really committed, Defonseca was there to deliver the show, drawing the line only at talking to one Oprah Winfrey – you can fake your heritage and rewrite your whole family's story, it seems, but you just can't lie to Oprah. Her case really says something about the need to sex up stories, even the ones about the Holocaust, as otherwise no one would care. But once the wolves are in, we are in business. And yet Hobkinson's film, which is really not that deep, to be honest, seems more interested in why people would buy it, rather than that lady's own story, although it gets dissected here, too, thanks to its very own Miss Marple.

It all feels a bit like an afternoon round of a murder-mystery game, with the participants listed according to their role: there is the teacher, the genealogist, but sadly no butler. It's a fun device that helps us to forget about some silly re-enactments and makes for easy viewing, despite its roots in the Holocaust, but it also pushes the film into small-screen territory – even with the Sundance label attached, Misha and the Wolves goes out with a wink, rather than a bang. Defonseca takes a back seat, reduced to some obvious conclusions painting her both as a victim and as a villain. Or maybe she’s still lost in those woods, wolves by her side.

Misha and the Wolves was produced by the UK’s Arts Alliance, Met Film Production and Bright Yellow Films, and Belgium’s Las Belgas and Take Five. Its world sales are taken care of by MetFilm Sales.

more about: Misha and the Wolves

Interview: Sam Hobkinson • Director of Misha and the Wolves

“It's a story about storytelling”

We talked to the director about his documentary, in which the actual canines are finally not the villains

Review: Misha and the Wolves

In his World Cinema Documentary Competition entry, Sam Hobkinson shows that when something seems too good to be true, it usually is 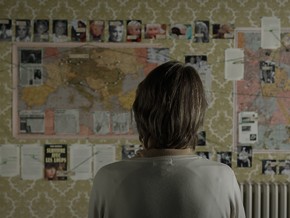