02/02/2021 - Corruption is at the centre of this first feature by Bulgarian director Yavor Petkov, now available on Bulgarian TVoD platform gledam.bg

An unconventional film, with an unconventional production process and an unconventional release. That sums up Yavor Petkov’s first feature, Danny. Legend. God. [+see also:
trailer
interview: Yavor Petkov
film profile], a UK-Bulgarian production, which was remotely pre-produced from London, was entirely shot in Bulgaria, and is determined to look deep into mentalities that prove a fertile terrain for the spread of corruption. After a few festival selections and an award won by cinematographer Rumen Vasilev at last year’s Golden Rose Film Festival (see the news), Danny became only the second Bulgarian minority co-production (after Pelican Blood [+see also:
film review
trailer
interview: Katrin Gebbe
film profile]) to be released exclusively online: since last Friday, the film has been available (albeit geoblocked to Bulgaria) on the new Bulgarian TVoD platform gledam.bg.

Danny examines the idea of corruption, how it bends rules and how it benefits only a few, harming many others in one way or another. Even the film’s visual style, a homage to the Belgian classic Man Bites Dog (read more in Petkov’s interview), and premise become an analysis of corruption in a more general sense, as we follow a film crew led by a British journalist (Kate Nichols) who has been promised an exposé on money laundering by Bulgarian small-town councillor and entrepreneur “extraordinaire” Danny (Dimo Alexiev). The only problem is that as soon as Danny sees the camera, his own plans for the shoot take centre stage, with demented dreams of making a film that will take Hollywood by storm...

A politician is expected to work for the benefit of the average man. Likewise, a film is also expected to observe certain conventions (or even meet certain expectations of the audience), but what if the movie is hijacked, like the fictional documentary in the screenplay, by its unpredictable, boisterous, coke-snorting, ultimately obnoxious protagonist? There is a big disparity between expectations and reality, and we only need one element as disruptive as Danny for them to become completely separate.

Steeped in dark humour, the film explores what a man can do if he considers himself above the law. At one point, Danny thinks his godson’s teacher is not being respectful enough to the overweight, weirdly detached teenager (Borislav Markovski). What will Danny do? Exactly what a man who considers himself above the law would do to make things “right”. And here, the film becomes a discussion on perceived power, but also on accountability and responsibility. Things get even more profound (or playful?) when we take into account the presence of the crew: when should they stop being mere witnesses to Danny’s antics and start standing up to him openly? Or shouldn’t they?

Danny is unfortunately too long for its own good. It is also a hard watch, with a shouting, violent, entirely rebarbative protagonist being front and centre for too long and doing the same, deplorable things. Given that Danny is a composite of the thousands of real-life Dannies making money and power work for their own benefit in thousands of Eastern European cities, the audience may like being given this (fictional) access behind closed doors, where shady deals are made in noisy clubs, policemen are bribed in nameless cafes and so on, but we would have expected more nuance and range. Even so, London-based Petkov did succeed in making a highly unconventional portrait of corruption, even if Danny is at times just as obnoxious as its protagonist.

Danny. Legend. God. was produced by Shipka (UK), with help from Bulgarian production company Debut Film. The film is being handled internationally by Hewes Pictures. Reel 2 Reel Films is in charge of releasing Danny in North America, the UK and Ireland.

“Aren’t we pretending to be someone else, at least sometimes?”

We chatted with the Bulgarian director, whose feature debut gets released domestically on Friday

Corruption is at the centre of this first feature by Bulgarian director Yavor Petkov, now available on Bulgarian TVoD platform gledam.bg 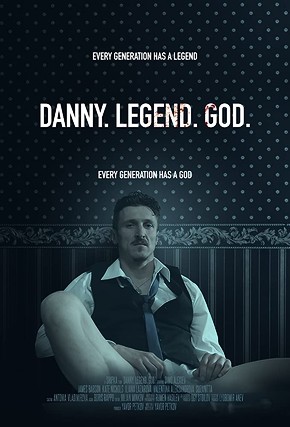