In her first feature, Persona Non Grata [+see also:
interview: Lisa Jespersen
film profile], which has just world-premiered at the Göteborg Film Festival, Danish director Lisa Jespersen delivers a comedy-drama about uncomfortable family relations. Danish cinema is famous for such fare, and Jespersen approaches it in a lighter, more audience-friendly way than we are used to. The hero, an author in her early thirties, who changed her name from Laura to Irina and is played by Rosalinde Mynster (from Christian IV [+see also:
trailer
film profile] and Truth About Men [+see also:
film review
trailer
film profile]), returns from Copenhagen to her small hometown in Jutland for the wedding of her brother Jannik (Adam Ild Rohweder).

Already as her mother (Bodil Jørgensen) picks her up from the train station, we witness the tense atmosphere born of old resentment and the fact that Irina has moved far away from the village not only physically, but also in her mind. Her mum complains that someone broke into her flower shop and stole money, and Irina opposes her desire to put the thief behind bars by explaining how jailing young people is not good for society.

Once at their home, on a farm, Irina is shocked to see that Jannik is marrying Catrine (Anne Sofie Wanstrup), a girl who bullied her throughout school. Neither of them has forgotten it, although Catrine pretends it's all just water under the bridge. An imposing woman with a small daughter, Catrine is a dominant type who wants everything under her control, and especially the wedding preparations. Irina's mother has taken a shine to her future daughter-in-law and even promised to hand the flower shop over to her. Worse still, she gave her her grandma's wedding ring, which Irina was supposed to get. Our hero's frustration with the unfairness of it all grows, and she barely manages to hold back.

Irina hasn't been back home in years and has become a totally different person in the meantime. A vegan in this family of cattle rearers, she is in an open relationship with a climate activist, the hipster author Benjamin. At an exhibition, their friend complains how her boyfriend is impotent because of climate anxiety.

In her first novel, Irina described her difficult period growing up – "Half of it is about Catrine," she tells Jannik, who has not read the book, and nor has anyone in the family, for that matter. But Catrine finds an interview with Irina on YouTube, where she speaks about how horribly backwards her village and family were... Naturally, everything will come to a head at the wedding, and predictably, the tables will turn and our hero will come to understand the importance of family and one's true roots.

Building on the tired urban-rural divide trope, Jespersen eventually makes fun of the former more than the latter, which makes the film somewhat reactionary in the context of Danish cinema. The wedding segment goes beyond the expected discomfort of edgy family drama and delivers a few intentionally cringe-inducing moments that decidedly place the film in mainstream territory.

Visually, it's a rich picture with eye-popping colours, shot by DoP Manuel Alberto Claro, who throws in just a bit of that Dogma-style handheld camera to intensify key relationship moments and revelations. The acting is competent all round, with Mynster having to balance the nervousness and the humour, usually to satisfying effect.

With its kind-hearted message of tolerance, Persona Non Grata is truly an uncomfortable Danish family drama “lite”, and its best chance in these pandemic-riddled circumstances is an evening prime-time slot on a widely watched TV channel. It was produced by Copenhagen-based Hyæne Film ApS, and international rights are handled by Picture Tree International.

“It's a humorous observation, not a degradation”

We talked to the Danish director to get the low-down on her film, celebrating its world premiere at the Göteborg Film Festival

How can Nordic films reach an international audience?

The movie, boarded by Picture Tree International, centres on the fortunes of skiing champion Franz Klammer during the 1976 Winter Olympics 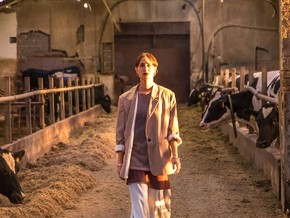