05/02/2021 - In Antonio Pisu’s film, which premiered in Giornate degli Autori and is now available on Italian VOD, three Italian boys encounter a crude reality while on holiday in Ceausescu’s Romania

Lodo Guenzi (centre) in an image from Est

If the rule of the road movie is to transform its characters, who at the end of the journey are no longer the same as they were when they first left, then Est [+see also:
trailer
interview: Antonio Pisu
film profile] is the quintessential road movie. Presented in the Giornate degli Autori section of the 77th Venice Film Festival and now available on the main VOD streaming platforms, the second feature from Antonio Pisu (Nobili bugie [+see also:
trailer
film profile]) is inspired by a true story. Set on the eve of the fall of the Berlin Wall, the film shows three young Italian men leave their quiet town of Cenesa, in Emilia Romagna, to embark on a trip across Eastern Europe in search for adventure, lighthearted and careless; only to then clash, once in Ceausescu's Romania, with the harsh reality of a dictatorship and a people reduced to starvation.

Pago, Rice and Bibi (played by Matteo Gatta, Lodo Guenzi – best known as the singer in the band Lo Stato Sociale, here making his screen debut – and Jacopo Costantini, respectively) leave for Hungary with a light spirit, and the trunk of their car full of goods which are very attractive to the poor Soviet peoples (among them colourful bras and chocolate chip cookies) to sell them clandestinely on the street. In Budapest, they meet a man who fled Romania months earlier and entrusts them with a suitcase, its contents unknown, to be delivered to his wife and young daughter in Bucharest. This is the boys’ first real contact with the reality of those places, made up of denied freedoms, people on the run and broken families. What should they do? Help this desperate man and take all the risks that would involve, or close their eyes and continue on their journey as Western tourists in search of "exotic" experiences, unburned by any obligations?

Between nervous breakdowns, strange encounters and a few missteps, the suitcase repeatedly entering and exiting their trunk, the plot of Est unfolds at the rhythm of the three protagonists’ progressive realisation and growing empathy for the difficult reality that surrounds them — long lines to get basic necessities, restaurants with no food to serve, telephones under control, people’s joy when faced with the most simple things, such as the smell of coffee — but does not abandon the moments of lightness typical of a trip between three friends in their twenties. Well articulated, the screenplay also guarantees a good level of suspense, with the circle of the Securitate gradually tightening around the three Italians. The reconstruction of the era (the end of the 1980s) and of the places is meticulous, and the inclusion of authentic images shot during the real journey that inspired the film (the one made by Maurizio Paganelli, Andrea Riceputi and Enrico Boschi, told in the book “Addio Ceausescu” on which the screenplay is based) give Est the quality of a testimony that is fresh and precious.

VENICE 2020: Antonio Pisu talks about his spirited and meaningful road movie Est, which opens the Venetian Nights of the 17th Giornate degli Autori 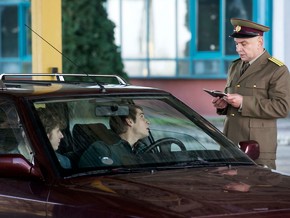 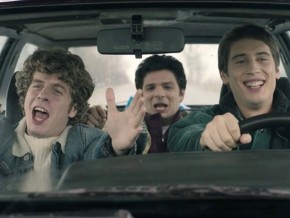