Review: The Salt in Our Waters

Bangladeshi writer-director Rezwan Shahriar Sumit's first feature, The Salt in Our Waters [+see also:
trailer
film profile], took part in the Göteborg Film Festival’s Ingmar Bergman Competition after showing at the BFI London and Busan Film Festivals. It is a lively, warm film dealing with the themes of authority, personal freedom, religion and climate change through a straightforward story of a city man coming to his late father's village.

We meet thirty-something sculptor Rudro (Titas Zia) in a Bay of Bengal port as he first fails to grasp the necessity of bribing an official who won't let his big, wooden box onto the boat without inspection. Once at his destination, a remote mangrove island on the Bangladeshi delta, he is warmly welcomed by his host Bashar (Ashok Bepari) and a bunch of men who are happy to unload the cargo for free. Also coming to meet the stranger is the village chief (Fazlur Rahman), whom they call "Chairman", a controlling religious and moral leader.

Rudro came to the island for inspiration for his newest installation. When the men open the box, there are three humanoid figures wrapped in plastic, and they instantly flinch. Bangladesh is a deeply Muslim country, and the difference between forbidden idols and artistic sculptures is not clear-cut.

The bright-eyed, optimistic Rudro loves the simple beach hut he is renting from Bashar. He unpacks his sculptures and starts working on them, and some village kids, led by Bashar's young son Taher, become interested. Soon, a bunch of boys are sitting in the studio, working with clay. They are watched with disapproval by the village men, who see this as an affront to Allah. Taher's older sister Tuni (Tasnova Tamanna) is also attracted to the stranger, but she has to be especially careful.

When on the first day of the fishing season, which is the primary source of subsistence for the village, the boats come back almost empty, Chairman blames it on Rudro's "idolatry". The educated man's climate-based explanation is in vain, and a toxic atmosphere has been created. The fish will return the next day, confirming Rudro's prediction, which earns him back some respect, but he will become a target again after he is seen alone with Tuni.

But a cyclone is coming, and Chairman urges the fishermen to go out despite the risk, to pay no heed to the warnings on the radio, as Allah will protect them. Of course, Rudro has a completely different perception, and his inherent sense of humanity makes him act upon it.

It is a simple, straightforward story that pits two worldviews against each other, but Rudro's tolerant character serves as a filter that prevents a simplified, black-and-white conflict. The film also feels very honest, as if this is exactly what the director thinks and feels about his country.

Visually, the picture is a feast, but not in a gaudy, Bollywood-esque way. The skies are overcast most of the time, which makes the sand look ochre, rather than golden, and the shallow waters brownish. The greenery is lush, but the colourful clothing of the villagers is nicely patinated. The most striking scene concerns a huge tanker stranded in the sand: a post-apocalyptic image as if from The Planet of the Apes that hints at climate change, which Bangladesh faces more urgently than most countries.

With her handheld camera, Thai DoP Chananun Chotrungroj often focuses on the tactile and the dynamic: the hands of boys making sculptures, the sweaty faces of men planting fishing poles from their boats and the sari-wrapped bodies of women working in the gardens.

The Salt in Our Waters is a co-production by Bangladesh's mypixelstory and France's Arsam International. The UK's Film Republic has the international rights.

more about: The Salt in Our Waters

Review: The Salt in Our Waters

The winners of the 2020 TFL Audience Design Fund revealed 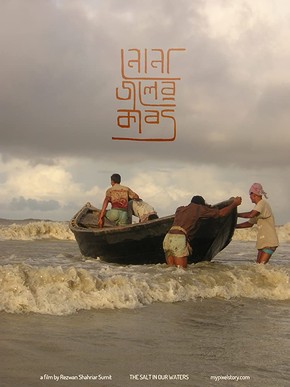