10/02/2021 - Edgar Wright has made a smart, dynamic and definitive documentary about Ron and Russell Mael, aka the Sparks brothers

Edgar Wright has made a smart, dynamic and definitive documentary about Ron and Russell Mael, brothers and founding members of the band Sparks. Ron is now 75 and Russell 73, and The Sparks Brothers [+see also:
trailer
interview: Edgar Wright
film profile] opened in the Premieres section of the Sundance Film Festival.

The documentary starts from the default assumption that audience members have probably never heard of the Maels (which is probably true for most). Wright posits that Sparks are the band that musicians love, but who have never got the fame or recognition from the public that they deserved. This documentary goes a long way in rectifying that, by telling a fun, varied and beautiful history of two brothers who are forever pushing boundaries and living outside of their comfort zone.

On a practical level, Wright tells the story using talking-heads interviews, ranging from famous celebrities to fans with good stories who responded to a call on social media. There is plenty of archive footage capturing 50 years of history, with appearances by Sparks on Top of the Pops and British talk shows. Where archive footage isn't available, animated sequences are used instead, and there is even one hilarious reconstruction. The testimonies of the brothers themselves are the backbone of the film: they offer up great memories from their career, all told in the witty, intelligent and entertaining style that has become a hallmark of their songs.

It's fascinating that what makes the brothers such eclectic and enthralling musicians is very similar to the elements that make Wright such an eclectic filmmaker. They all like to tell stories about human relationships through humour and are not afraid to make fun of themselves. They have an inimitable artistic voice that tells stories in a way people can understand, putting smiles on faces.

Wright is also not afraid of the running time, deciding to make sure that all bases are covered, rather than skip over bits of their career. It is almost an album-by-album guide, using key songs to illustrate the point being made. It starts from their childhood in Los Angeles, spending their days surfing, to their life today, going for coffee every morning at their favourite haunt. It includes the band's appearance as themselves in Rollercoaster, a 1977 event movie that was not very good.

There have been plenty of failed attempts at getting movies made, mostly musicals featuring their music. That is, until we get to the present day, as the brothers have penned one of the most highly anticipated films of the year, Leos Carax's musical Annette, starring Adam Driver as a stand-up comedian and Marion Cotillard as a world-famous soprano. In one sense, this documentary could be seen as the world's most extended trailer for Annette, as it creates a heightened sense of anticipation for what might be born of a combination of their imagination and the filmmaking of Carax.

Wright also has fun discussing the infamous look of songwriter Russell Mael, whose toothbrush moustache makes him look like Charlie Chaplin or Adolf Hitler. There are discussions of clothes and songwriting, and occasional tales of girlfriends, although their personal lives are the one area that Wright chooses not to delve too deep into in what is otherwise a great roller-coaster ride of emotions.

The Sparks Brothers is a UK-US production staged by MRC and Complete Fiction.

more about: The Sparks Brothers

“Once you are into them, you don't grow out of them”

We chatted to the British director about his feature, which documents the incredible career of Ron and Russell Mael

Edgar Wright has made a smart, dynamic and definitive documentary about Ron and Russell Mael, aka the Sparks brothers 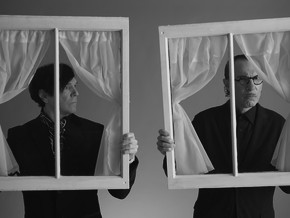