Dead & Beautiful [+see also:
trailer
interview: David Verbeek
film profile], directed by David Verbeek and shown in the IFFR’s Limelight section, is a lot of fun. It's a lot of glossy, easy-to-digest fun, to be more exact, the kind most efficiently delivered by Netflix Originals these days. Its presence at Rotterdam is welcome, if baffling, even considering Verbeek's status as a regular there, as it's easy to imagine the critical drubbing this story would normally get outside of the festival circuit – its commercial flair and gorgeous, super-rich people playing tricks on each other seeming out of place among the handheld-style, politically charged flicks even before the blood-sucking tendencies kick in. But let's start from the very beginning.

As a group of wealthy friends in Taiwan (consisting of Gijs Blom, Aviis Zhong, Yen Tsao and Anechka Marchenko) try their best to scroll their existential boredom away, they start to challenge themselves more – once it's your turn to “entertain”, you better deliver. It's bound to get out of hand, and it does so in style: from a fake funeral, it's straight to an odd ritual “that was supposed to be cute”, ending with a mass blackout and a corpse, and something weird inside their mouths.

It's a ridiculous concept, but one that's easy to embrace and then give thanks for: as if the cast of Bling Empire were to wake up with fangs, yet refused to give up the lifestyle. And why the hell would they? When faced with imminent danger, there is always a helicopter nearby or a nice crib to hang around, wine glass in hand, their unlimited means coming in especially handy in time for the big reveal. But there is some melancholy to their antics, predictably, as this bunch might have everything and then some, but they are lonely and struggling to figure out what it is that they want away from their families' billions. They always are, somehow, from Kathryn Merteuil to the whole Gossip Girl team, learning the hard way that one designer headband a day doesn't keep the sorrow away.

This darkness within teases a more complex creation than Dead & Beautiful really is, with its title seemingly nicked from the long-running soap The Bold and the Beautiful, about the Forrester family, or maybe that’s just wishful thinking. While ultimately managing to surprise, Verbeek actually refers to other familiar tropes as well: there is a scary old lady whose only function is to ominously point fingers, and gory backstories about tribal people that inspired – ha! – Bram Stoker. But the film works best when Verbeek does whatever he wants with them, and gloriously enough, it involves mind-controlling a lady at 7-Eleven when she won’t accept a card payment for gum. As they say, with great power comes great responsibility.

Dead & Beautiful was produced by Dutch outfit Lemming Film and Taiwan’s House on Fire International. Its sales are handled by Indie Sales, while its Dutch distribution is overseen by Periscoop Film.

We talked to the Dutch filmmaker, who has attempted to reach a broader audience with his new film

France is set for the competition, while Playground, Bigger Than Us, Magnetic Beats, Robuste and Bruno Reidal, Confessions of a Murderer also shine bright on the Croisette

IFFR’s CineMart is all set for its 37th edition 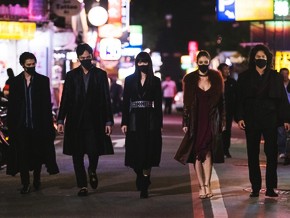