02/03/2021 - BERLINALE 2021: Ayten Amid’s 2020 Cannes Label-selected drama is a touching portrayal of three Egyptian youths and the tragic event that binds them

Existence is mediated by technology, at the mercy of it even, in this eye-opening film by rising Egyptian helmer Ayten Amin. Possessing an authentic naturalism that is eventually overtaken by radical jumps in location and point-of-view, Souad [+see also:
trailer
film profile] marks a confident step into the film festival limelight for the director, having been selected for Cannes 2020, and now finally world-premiering in Berlinale’s Panorama strand.

Up to now, few Egyptian features have received quite this kind of major festival spotlight, and beyond Amin’s engaging filmmaking style and flair with actors (most of the cast members are non-professionals), Souad unveils a whole world as well as, crucially, a young female-centered perspective that are worth discovering for the first time. That world is of course rife with the challenges of being a young woman in a majority Islamic country, but it is also subjected to the distorting effects of social media, a topic examined in great damning detail here.

We begin on a public bus, always a space of greater sociability in Middle Eastern countries. 19-year old Souad (Bassant Ahmed) is showing pictures and regaling stories to strangers of her beloved boyfriend Ahmed (Hussein Ghanem), who is off on military service in the Sinai Peninsula. After a brief bus transfer, Souad continues chatting away, only now the story is different: Ahmed is older, she’s in medical school and she hails from a long line of doctors. We immediately feel pity for the story’s initial protagonist, realising that these lies are a vital coping mechanism for her as opposed to expressing anything unsound about her nature.

Her life in rural Zagazig, shown with a claustrophobic handheld cinematography that recalls the Dardennes, is a pressure cooker of social tension. Parental understanding is limited, and her main social circle, including the more romantically-experienced Wessam (Hager Mahmoud), is well-meaning but more likely to provoke and gaslight her. On top of that, she is boiling in the utter agony of Ahmed ignoring her loving messages, a feeling only exacerbated by the voyeuristic smokescreen of his social media presence (he is a ‘content creator’ for Facebook and TikTok working in Alexandria, a more fashionable Egyptian city — someone who is literally in the business of inventing new public selves).

A tragic rupture for Souad shifts the film’s attention to her more self-assured younger sister Rabab (Basmala Elghaiesh) who secretly travels to Alexandria to actually meet Ahmed, a state of affairs denied to Souad across the whole story. Accompanied by a new title card, as if designating a restart to the film, we realise this is really a multifarious ‘anthology’ film that has tricked us into expecting a more delimited single character study. Rabab and Ahmed become a near-romantic odd couple, strolling the streets of Alexandria, and the film’s mood shifts to something closer to Before Sunrise and It Happened One Night, more fantasised and improbable than anything in its earlier movements.

Like the best humanist directors, Amin achieves a modulation of different tones and creates a filmic arc that evokes the triumph of life and optimism over tragedy, even if the focus on the supposedly ruinous effects of social media is a little sensationalised and uncertain. But these latter qualities are two of the very tenets of adolescence, so let us laud a work that honours those angsty and sharp edges rather than carry the dismissive or patronising traits of so many other films.

The movie has scooped Best Film, Best Screenplay and Best Actor on a great night for the Georgian-Russian-Bulgarian-Monégasque-US co-production 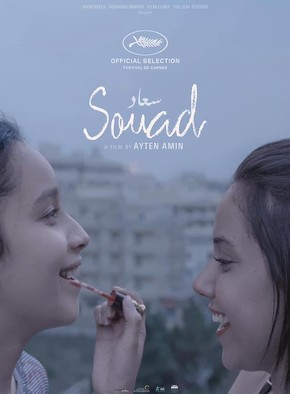