03/03/2021 - BERLINALE 2021: Céline Sciamma moves with her fifth film, delivering a simple story that hits so close to home it might as well be a long-lost friend

Céline Sciamma, while rightfully lauded for her portrayals of women, just seems to “get” kids. Or maybe she remembers it all, that lady magician – remembers what it feels like, how children see things and how they hurt. Also behind the script for My Life as a Courgette [+see also:
film review
trailer
interview: Claude Barras
film profile], she doesn't ever talk about childhood, necessarily, like grown-ups do once they reach that certain point in their lives, changing it into something it wasn't. Instead, she crouches down to their level, letting them be who they are. With Petite Maman, a tiny little marvel premiering in the Berlinale's main competition, one does feel eight years old all over again, with all the associated perks and limitations, and scared of a black panther – or was it just a shadow? – lurking next to the bed at night. Or trying to forget all about the Critters franchise, not to mention their tendency to form a flesh-eating ball, but it's all fine now, thanks. And thank you, Céline Sciamma, for bringing that back somehow.

It all starts with little Nelly (Joséphine Sanz), sticking to her tradition: she likes to say her goodbyes to the inhabitants of the pensioners' home she knows very well, having visited her grandmother there before, one assumes. This time it’s different, though, and these are the last goodbyes – Nelly's grandmother is gone. From there, it's straight to her mum's (Nina Meurisse) childhood home, which needs to be cleaned out now. This whole process, well, it's one of those experiences that it's really hard to talk about, and Sciamma handles it softly, as old childhood books and forgotten notebooks are suddenly there, staring you in the face. Perhaps that's the moment when people's childhood is truly over, actually. Stored away somewhere, be it in the attics or basements, it always seems to happily exist on its own, Toy Story-style.

Such confrontation hurts – there is no way around it and no way to prepare. It's a lot to take in, also for Nelly's mum, who just gets up and departs suddenly, leaving her there with her dad. But Nelly, one of those kids who always seem to notice more than the surrounding adults would like, isn't exactly alone – not after she meets Marion, a girl her own age, in the woods, while looking for her mother's famous childhood hut. All it takes is a few words, and a friendship is officially established, sealed with a quick visit to Marion's home, which, funnily enough, looks very familiar.

There is no need to reveal more, but what strikes most is that desire kids have sometimes to really know their own parents. Really, really know them – not just from anecdotes that they occasionally share, told so many times it's basically like recounting pure fiction. “I was scared of my father,” admits Nelly's dad when such a demand is voiced here, and it's easy to see that one counts. She doesn't want throwaway stories, this one. She wants to know how they felt when they were small, just like her, how they thought back then and, yes, what they were afraid of. In this sense alone, Memory Box [+see also:
film review
trailer
interview: Joana Hadjithomas, Khalil J…
film profile], also in the main competition, could be this film's older sister.

It's almost hard to explain how something so tiny, so simple and so unassuming can also be so touching, but again, Sciamma just knows how to speak that language, and she is probably still able to see those black panthers in her bedroom, too. Claire Mathon’s cinematography gives it all a nostalgic feel, or maybe it's just that damned autumn, but the past is never too far away in this film. It's just down the road, so maybe you should pay it a visit some time.

Petite Maman was produced by France’s Lilies Films. Its world sales are managed by mk2 Films.

BERLINALE 2021: Céline Sciamma moves with her fifth film, delivering a simple story that hits so close to home it might as well be a long-lost friend

The likes of Céline Sciamma, Radu Jude and Xavier Beauvois will be vying for this year's Golden Bear

Appealing new titles for mk2 Films at the online AFM

New to the lineup are Petite maman by Céline Sciamma, Costa Brava, Lebanon by Mounia Akl, Silver Star by Ruben Amar and The Good Boss by Fernando León de Aranoa 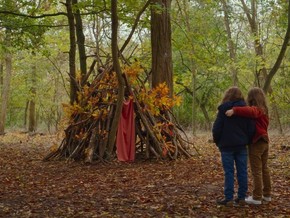