The good guys dress in black, remember that, but in Amanda Adolfsson's second feature, Nelly Rapp – Monster Agent [+see also:
trailer
film profile], based on Martin Widmark's books, bat-shaped pins beat the Ray-Bans every time. Still, there is more than a faint whiff of Men in Black to this story, now welcomed to the Berlinale's Generation, especially as far as the whole concept of “monster agents” is concerned – an underground organisation devoted to dealing with misbehaving mythical creatures, also gathering its intel from tabloids and providing long-serving members with cover jobs so as not to scare the civilians away. Even those that beggar belief, like a “life coach”. That one is clearly fake.

It's not exactly a problem, as despite familiar threads, Nelly Rapp is still an adorable proposition, boasting – a rarity as far as most children's films go – an actual sense of humour. Times have changed, but water spirits still prefer to play violin in the buff, ruining perfectly respectable concerts, Frankenstein monsters could head straight to The Great Swedish Bake-off, and someone tries to force-feed a clearly upset zombie some broccoli. Frankly, that one is still prompting some giggles.

Little redhead Nelly (Matilda Gross) takes all these revelations in and accepts them like a champ, including the one that her late mother was also very much in the business. Before her mysterious disappearance, that is – one that could possibly be tackled in a sequel, yes please. It might be because she never really fitted in, certainly not in her school, where telling stories about “ladies covered in blood” and squirting ketchup all over an unimpressed pint-sized audience rarely puts you in the popular club. This whole film is about blending in, actually, or happily opting to stick out like a brutally severed thumb. With Nelly, even her hapless dad can't help but wonder if maybe she could – the horror, the horror – “pretend to be more like the others”, and it's a dilemma the “difficult” monsters are facing as well, not that anyone bothers to ask what they actually want. Not the broccoli, though – that much is painfully clear.

This message of inclusivity and self-love plays rather well here, mostly because of the fun little titbits that take away most of the schmaltz – after all, Nelly's scaredy-cat dad still leaves her alone with someone named Uncle Hannibal for the whole autumn break, despite his propensity for dragging chained figures into his spooky mansion at night. Talk about character-building, as nobody here wastes too much time lying to the girl either, starting with a simple exchange that successfully establishes future trust. “What's in the cellar?” “Monsters, so don't go down there.” She will, obviously, with her dog London by her side. But at least she will know what to expect now.

Yuri Ancarani’s Atlantide reigned supreme when it came to the festival’s awards, at the close of this successful 12th edition

With 15 films across two competitions, the section goes beyond the obvious, the dominant and the loud, and includes new voices in its line-up 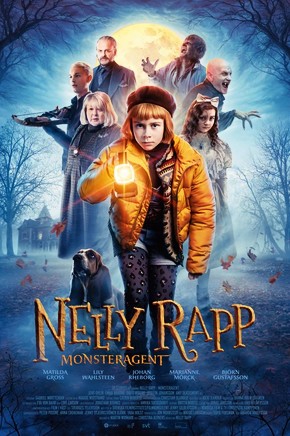