Review: FREIZEIT or: the opposite of doing nothing

18/03/2021 - Five young people from Berlin fly the flag for a generation who are engaged in deep, practical debate regarding the future, gentrification, sexism and conformity to dominant social values

"Can we keep on living in our area or will we inevitably be forced to move to the suburbs?" "How can we be free citizens in a culture based on profit maximisation and performance?" "How do we live our lives when we don’t share the values celebrated by society?" "When faced with sexism, should we cross the road or refuse to submit?" There’s a lot of talk, at present, about a generation of young people who are said to have suffered a great deal in these pandemic-ravaged times, and German director Caroline Pitzen’s documentary FREIZEIT or: the opposite of doing nothing - a debut feature film presented in the international competition of the 43rd Cinéma du Réel Film Festival - journeys back in time to the summer of 2018 in Berlin, to provide an informative perspective on the identity of, and the fundamental questions harboured by certain members of this generation.

Jasper, Juno, Lilly Mary, Hartig and Mila are just 20 years old and view the gentrification of the alternative Friedrichshain district, where cocktail bars are replacing little local grocery stores and whose long-standing residents are having to relocate to the outskirts to make room for yuppies and bohos, as a great injustice. But this is by no means the only subject of concern for these five young people, who come to form a small yet highly engaged think tank, and who take part, where possible, in demonstrations against the far right and in educational high school initiatives. They nurse strong convictions (which might be described as leftist humanism), but they nonetheless try to understand those who conform to dominant social rules without question. Above all, they engage in discussions, arguments and debates, tackling issues as if a Rubik’s Cube before developing clear ideas to communicate to others.

The film offer up a vast overview, encompassing the roots of sexism ("it goes far beyond statistics on the pay gap or inequalities in social position, it exists within the interactions which play out between people in the public arena"; "the image of women which is fashioned by society is then reproduced in schools"), the education of schoolchildren on human rights and participation in decisions so as to free themselves from the shackles of hierarchical thought, the future and how we can stay true to our ideals ("the squatters of the 1980s ended up buying their apartments…; they turned into huge capitalists, I’m worried that’s how things will turn out"), the Bavarian law on policing which was in gestation at the time ("in a constitutional state, we shouldn’t allow the authorities to record information on innocent citizens who have been identified as potentially dangerous on the basis of vague criteria, and then use it to keep them under house arrest or to prevent them from travelling"), etc, all interspersed with a variety of readings (from texts by Kurt Tucholsky or Marx and Engels) and films (Kuhle Wampe or Who Owns the World? directed by Slatan Dudow in 1932, based on a script by Bertolt Brecht).

These young people display great intellectual maturity, but they also act their age: they sing, dance, laugh, smoke, drink beer, walk in parks and on roofs, and criss-cross Berlin by bike. Using unrushed static shots, Caroline Pitzen lends her protagonists an endearing air and allows a snapshot to emerge of the collective manner by which ideas can form and a (micro)society take shape: "pay attention to others and listen to them, don’t be selfish" - tenets which retain their validity regardless of ideology or time.

FREIZEIT or: the opposite of doing nothing is produced by Caroline Pitzen, Ljupcho Temelkovski and Philipp Fröhlich on behalf of OKNO.

more about: FREIZEIT or: the opposite of doing nothing

Review: FREIZEIT or: the opposite of doing nothing

Five young people from Berlin fly the flag for a generation who are engaged in deep, practical debate regarding the future, gentrification, sexism and conformity to dominant social values

Running 12 to 21 March, the 43rd edition of the festival will take online form, offering up an abundant programme including an international competition screening 21 titles

The German film critics association, which is at the origin of the event funded in 2015, organised this year an online edition including a film selection, conferences and debates 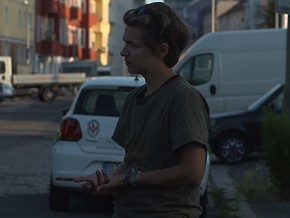