One of the first principles you learn in any introductory filmmaking class is about continuity: that certain visual details must be maintained from shot to shot. But filmmaking originality often derives from breaking rules such as this one, and Colors of Tobi [+see also:
trailer
interview: Alexa Bakony
film profile] — while not as extreme as work by, say, Godard — has a novel formal trick up its sleeve to unsettle our notion of the passage of time. It’s characteristic of a film that marks an assured first effort out of the gate for debuting director Alexa Bakony, which world premiered virtually this week at BFI Flare, the biggest LGBT film festival in Europe.

This continuity-breaking visual flourish concerns the dyed hair of the film’s lead character Tobi, a trans man in his late teens getting by in a tiny Hungarian village (which is interestingly not named, and is also the director’s hometown). He will have pink highlights one moment, then a simple cut into the following segment will show him bleached blonde, or back to his natural dark colour. Yet this is never jarring, but rather an apt pathetic fallacy for the film’s key concern: the mutability of identity, complicating our expectation that a gender transition will be a linear, if sometimes torturous, journey.

As much as it cleverly upends our premonitions about Tobi fully identifying as a man, Colors of Tobi is otherwise a work of consummate, almost novelistic storytelling, showing how people grow over a large expanse of time, and reaping insight into inner lives. A natural comparison is to Greta Gerwig’s Lady Bird: it is a story of escape and eventual blossoming into adulthood, leaving in its wake dumpy suburbia and a mother nursing her own conflicted, fiercely loving feelings. There’s even a hangdog, Tracy Letts-esque paternal character - Tobi’s father Zoltán. Tobi begins the film formally declaring his new gender identity on an online government form, and we proceed from there as his mother Éva shepherds her beloved youngest child through the gender reassignment process, during his final year in high school.

It’s a uniquely 2010s story that could take place in many different national locales, but creates particular charge from its Hungarian setting, where the country’s socially conservative leadership creates a tense environment for gay and trans people. This struggle was dealt a tragic blow in the early months of the pandemic, when after an emergency powers decree was signed, a new bill was approved curtailing the ability for people to self-define their gender. Although the first scene shows Tobi doing just this, it would thus not be possible now — and the film gives no indication of, or is otherwise uninterested in, this context.

This clarifies a slight flaw in this observational, though very dialogue-driven film: in spite of how touching it is, and how well it articulates the characters’ existential dilemmas, the authorial presence is almost invisible, inadvertently lending the film a rather sterile, televisual feel. We are left to wonder what really interests Bakony personally in this story, and if a more individual perspective might have further complicated the subtle resonances at play here. But such questions are all natural byproducts of a film that so compellingly makes us consider what is at stake in devising a new identity, both on an individual level and within the wider historical context of the queer struggle.

more about: Colors of Tobi

“I wanted to encourage communication, to find what unites us and not what tears us apart”

András Ötvös leads the cast of the filmmaker’s second feature film, a Filmfabriq and Little Bus production set to be sold by NFI World Sales 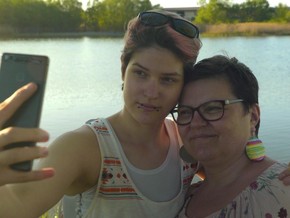