26/04/2021 - Marion Neumann presents her fascinating documentary, inviting us on a thrilling journey through the mysteries of nature

Eleven years after her first feature film Ce moment n’est pas le même, which focused on a Swiss artist residency called “Laboratoire Village Nomade”, the German-by-birth, Genevan-by-adoption director Marion Neumann is returning to the Visions du Réel Festival (National Competition) to present the world premiere (screened concurrently at CPH:DOX, in the Dox:Award line-up) of her intriguing new documentary The Mushroom Speaks [+see also:
trailer
interview: Marion Neumann
film profile]. What do mushrooms (or fungi) really mean to human beings? What (decisive) contribution could they ultimately make to the salvation of humankind? By way of her camera, and assistance coming courtesy of mushroom specialists from around the world, Neumann allows mushrooms to take to the stage, displaying them in all their destabilising and atypical beauty.

What really hides behind the generic term “mushrooms”? The complexity of these beings, caught half-way between the vegetable and animal world, cannot possibly be expressed through this label, which ultimately reveals little about their functioning and the way they approach the world. Beneath every mushroom there hides an invisible network of connections with other species, a labyrinth which allows them to exist but also to interact with other beings. Neumann ventures into this invisible, subterranean world, harvesting the stories which these complex organisms known as “mushrooms” can tell us. It’s as if the director is saying: listen to them, you’ll learn a lot about them, but also about yourselves!

Accompanied by specialists – researchers, mycologists, ecological activists and psychiatrists - Marion Neumann paints a captivating and surprising portrait of the life of fungi and of the (fundamental) ties they forge with the planet. The Mushroom Speaks makes us aware of the primordial role they play, not only in terms of protecting the planet but also, fundamentally, in safeguarding human beings. Happily, as a result of this journey through the meanders of the ecosystem, humankind no longer finds itself at the centre of the world; its role is re-evaluated in light of the complex links it maintains with other organisms. The planet becomes a multifaceted entity, inhabited by many lifeforms which influence and determine its functioning and survival. In this complex network of exchanges, mushrooms play a primordial role in the planet’s protection - seemingly subtle and “mute” organisms which are lent a voice by Marion Neumann.

Despite its exploration of a decidedly niche subject, The Mushroom Speaks can definitely be enjoyed by non-specialist audiences. Indeed, the film invites us to embark upon a fascinating journey to discover a multiform ecosystem which is bursting with poetry; a hidden universe which unfurls before our eyes, as if by magic. The destabilising, dream-like images we see in The Mushroom Speaks create a sense of confusion and necessary stupor, ultimately allowing us to reflect upon the way we exist in the world and on our complex and often conflictual relationship with nature.

The Mushroom Speaks is produced by Geneva’s Intermezzo Films, who are also handling international sales.

more about: The Mushroom Speaks

“The mushroom is an organism situated between life and death, and I was fascinated by it”

In the documentary by the German-born Swiss-based filmmaker, it's time to get to know your fungi

Marion Neumann presents her fascinating documentary, inviting us on a thrilling journey through the mysteries of nature 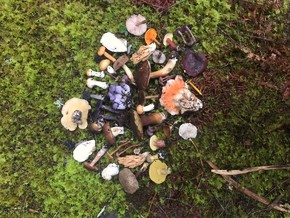