How would you react after learning that Joseph Goebbels and the Nazis may have changed the standard frequency from 432 to 440 Hertz in order to make the masses more aggressive and easier to manipulate? To what extent has the music we’ve been listening to for an entire lifetime been changed since said standard has been in place? These are the two complex questions opened up by Gunnar Hall Jensen’s bizarre documentary Oh, It Hertz!, competing for the Nordic:Dox Award at this year’s CPH:DOX. This conspiracy theory stimulates the documentary’s protagonist, American musician Laurie Amat, to start her own journey seeking for the truth, but gradually discloses a broader theme: what does sound mean for us? How does it affect and change our emotions?

All of these seem juicy ingredients for an outstandingly engaging documentary. Laurie is a charismatic, eccentric woman, and a storyteller that does not hesitate to disclose important elements of her biography, all of them linked to her personal feelings and experiences with music and sound. Throughout her journey, she meets a number of people who have, for different reasons, developed a unique bond – for some, almost an obsession – with sound. Among these testimonies are Scottish percussionist Evelyn Glennie, who has been deaf since the age of 12, but has learned to use the body as a resonating chamber; a Norwegian man called Stig Arne Skilbrei, who survived cancer and decided to fully dedicate his life to the quest of building the optimal sound system with the perfect sound, and Yoko Sen, an electronic musician who, after being seriously ill, got a passion for reinventing the excessive machine sounds in hospitals.

From time to time, the film shows archive footage of a Nazi orchestra playing majestic music. We can also see Laurie calling up archives to gather information about the mysterious 1939 conference that changed music tuning globally and being disturbed by the idea that Nazis may have “contaminated” the songs she has been listening to for a lifetime. These elements spice up the viewer’s expectations which, throughout the picture, are juggled between the different controlled interviews and cinematic excursuses accompanying Laurie in her journey investigating the power of sound. It is certainly a fascinating wandering – and technically well crafted, thanks to the pleasant photography by DoP Måns Berthas and the rich, engrossing soundscape by Øyvind Rydland – but it ultimately may betray the viewer. Towards the end, music historian Fanny Gribenski dismantles the conspiracy theory in the blink of an eye and with solid arguments. As the central theme of the relationship between sound and emotions is already strong and well told, one might wonder why the premise of such documentary had to be that of a theory already rejected by academia. Perhaps the controversial 1939 music pitch change might still have been an element of the plot, but framed and told differently.

Luckily enough, this aspect may not prevent the spectator from appreciating this documentary’s undeniable qualities; a light-hearted, playful approach to the topic, a strong protagonist along with a group of brilliant interviewees, an astonishing technical execution and an overall clear narrative structure that keeps the viewers hooked. And there is one more gem: the film’s post-credit sequence is humorous and worth discovering.

Oh, It Hertz! was produced by Christian Aune Falch, Torstein Parelius and Ingrid Galadriel Aune Falch for Norway’s UpNorth Film. Canada’s Syndicado is in charge of its world sales.

more about: Oh, it Hertz! 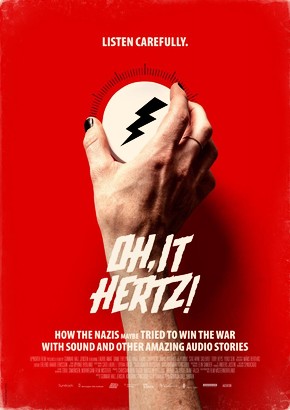