A new, exciting documentary tackling many thought-provoking topics, the first feature-length film by Marija Zidar, Reconciliation, deals with blood feud in the highlands of Northern Albania. The film world-premiered at CPH:DOX, in the Next:Wave competition, and while it may seem like an unexpected debut for a Slovenian woman director, the film itself proves that the filmmaker and the theme are in fact an excellent match.

"When you say Kanun Code, the whole world knows it's Albanian, we are not famous for anything else," says Gjin Marku, head of the NGO Nationwide Reconciliation Committee, at a fancy dinner with the elders of a village where the film largely takes place. The ancient law, hailing from the 15th century, regulates all aspects of life and is much more dominant in rural areas than more modern civil rules are. The law that Zidar is dealing with in the film is that of blood revenge.

The mechanism is, in general, well-known: when a member of one family kills a member of another, pride and honour require they hit back in revenge. This can go on for centuries, and it is estimated that some 3,000 people in Northern Albania are stuck in their houses in fear of such retribution. The cycle can be stopped if one family decides to forgive, but that is very complicated.

This particular story concerns the killing of 18 year-old Gjyste, who was shot in 2013, and the film starts one year later. Gjyste's father, Gëzim, is a close cousin of the killer, Fran (their fathers are brothers), who is in prison serving a 14 year sentence. Even their lands border with each other, and this is how the killing happened, even though what exactly transpired depends on who is telling the story. In any case, Gjyste appears to have taken the bullet intended for her father.

Now Gjin and the local bishop want to convince Gëzim to forgive. The middle-aged Gjin is a very sympathetic character: underfunded and harassed by right-wingers, it feels like he is fighting against centuries of tradition on his own. He wants to put up a temple in a historic location, and to make Gjyste into a symbol of sacrifice and forgiveness. The bishop, on the other hand, tries to appeal to Gëzim's Christian conscience.

The duality, or contradiction, of the Kanun and Christian faith, is one of the most interesting aspects of the film. In one scene, Gëzim and Pjetër, Fran's brother, end up working in the fields next to each other and start an argument about which law, the Kanun or God's, represents a higher authority.

Even though Gëzim says to Gjin, "This is not about anyone's ego, it's God who has to forgive," it is in fact exactly about ego. The Kanun is the one law that protects men's pride, where man can mean only male: the Bible preaches forgiveness, and civil laws are perceived in these parts as something imposed from the outside. But in the end, it is a woman who will effectively decide on the outcome of negotiations between all these self-important elders and patriarchs, in a scene that is surprising, touching and immensely gratifying.

There are many segments that engagingly lend themselves to interpretation, such as when Gëzim - torn between his pride and his hesitant understanding that Gjin's goal is essentially the right thing to do - carries a dedicated cross that the NGO man convinced him to put on his daughter's grave, as a symbol of reconciliation. Additionally, the magnificent highland landscapes, elegantly shot by DoP and co-producer Latif Hasolli, give the film and its theme an epic dimension. The music score by Dimitrije Vasiljević consists of a brooding, often suspenseful drone and a light, very tasteful ethno colouring. 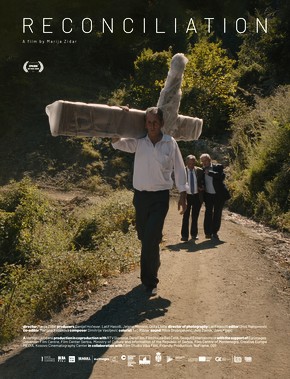 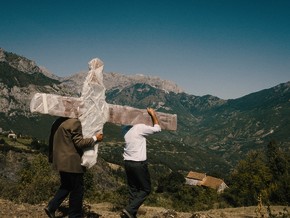