Review: The Banality of Grief

29/04/2021 - Part angry rant, part melancholic conversation with his late wife, this Jon Bang Carlsen oddity might not be his best, but it grows on you

Things get personal in The Banality of Grief, Jon Bang Carlsen’s reaction to the passing of his wife of 35 years, Madeleine; so personal it’s hard to warm up to his film at first, which reminds one of being bombarded with someone’s family photos, inside jokes and intimate stories, all too complex to recount to a complete stranger. Carlsen seems to acknowledge this too, almost annoyed by his pain and its predictability. But he is a grumpy griever, and his black, resigned sense of humour turns out to be a way in.

The fact that his film, shown in the Nordic: Dox Award section, isn’t really a monologue, also helps. It needs a listener – if, as he says here, "an ‘I’ needs ‘you’ to be real," it clearly applies to his cinema too. After his wife's death, Carlsen turned to what he knows best: filmmaking, probably because once you put that camera down the silence explodes in your ears. And so he chats people up, travels around the States and works on his upcoming project, looking for connections or fresh anecdotes he would normally then share with his wife. He still does, while narrating this story, proving that just because your partner is gone, it doesn’t mean you should suddenly stop talking.

What arguably brings the film down is Carlsen’s insistence on slamming Trump on a regular basis, over and over again, which at this point (luckily) already feels rather dated. And yet he is gradually opening up more as this journey progresses, really listening to what others share. People can be a cure for grief, some do claim, but once you are back home (because of some "damn virus"), it’s odd not to see your favourite person filling the kettle with water, just as she used to, believing everything can be cured with a nice cup of tea. If there is one thing this film manages to articulate very clearly, it is that after so many years together, such loss is almost of a physical nature, similar to losing a limb.

Selfish in his pain, as one tends to be, Carlsen ponders his own exit here, too - in style, preferably fired out of a cannon like Hunter S. Thompson, which allegedly cost his good friend Johnny Depp 3 million dollars. He does take some time to finally understand his wife, however. Her background, rooted in the "god-ridden Ireland," a complicated family history that made her the "wild, vulnerable warrior woman" he loved or her comments, coming back now to haunt him a little. He retaliates, though, implying her possible hook-up with Jim Morrison. Which, if it were true, would fall way below the age of consent. Proving that just because your partner is gone, it doesn’t mean you should suddenly stop bickering.

The Banality of Grief was directed and produced by Jon Bang Carlsen for C&C Productions.

more about: The Banality of Grief

Review: The Banality of Grief

Part angry rant, part melancholic conversation with his late wife, this Jon Bang Carlsen oddity might not be his best, but it grows on you 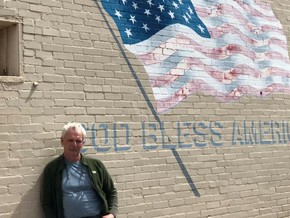