“It’s difficult to get both sides and understand what each one wants,” says Jonna Hanberg to her daughter Christine while driving her car and engaging in an intense exchange. Jonna is the mother of Peter, born deaf and blind, and now a 30-year-old man, whose disability prevents him from leading an independent, normal life and massively affects those of the people closest to him. This struggle for understanding and the huge efforts made by the whole family to constantly serve as Peter’s “eyes” and “ears” are at the centre of Cille Hannibal’s new documentary, He’s My Brother, co-directed with Peter’s sister, Christine. The feature, awarded a Special Mention in the Nordic:Dox Award strand of CPH:DOX, is now taking part in DOK.fest Munich’s main competition.

He’s My Brother is a highly emotional viewing experience from beginning to end. We come to know that Peter’s disability is extremely rare – he has also recently been diagnosed with a form of autism – and there are only three other people suffering from the same condition in Scandinavia. He needs constant guidance, and his only functioning senses are smell, taste and touch. Tactile communication, therefore, becomes essential in order to conduct any kind of activity, but there is an additional burden: a dedicated facility that was able to help the family take care of Peter shut down about five years ago owing to “re-structuring”, leaving the man’s fate totally in his family’s hands.

The picture’s strength emerges powerfully, as in many sequences, we perceive how problematic the whole situation is for everyone. On one hand, we see a man who cannot communicate, develops aggressive behaviours as a defence mechanism and feels like he is living in a cage – an experience that the viewer can only barely imagine, although the film manages to show a fraction of how dramatic this can be. On the other hand, his family members try to give him all the love and care they can, but they are also not able to live freely. Nevertheless, Jonna and Jørgen (Peter and Christine’s father), while immersed in a difficult present, are much more worried about the future and wonder who will end up taking care of Peter one day, once they are gone. Christine might become Peter’s guardian, but she is aware of how challenging and life-changing this choice would be. The documentary’s main conflict, revolving around the question “How can the four of them lead a dignified life?”, is explored through some intimate camera work and several excerpts from Hanberg’s family videocassettes, depicting a young Peter discovering the world and the love of his nearest and dearest by touching, hugging and falling asleep on his mother’s belly. He’s My Brother is a painstaking portrait of a family whose serenity has been hanging by a thread for too long, where ephemeral moments of normality or happiness are as rare as they are precious. In one of the most emblematic scenes, for example, we see Christine and Peter laughing, poking and tickling each other as if they were still children, seemingly forgetting for a moment what they are both going through. It is a touching, brutally sincere story of suffering, waiting and love.

He’s My Brother is a co-production between Denmark’s Final Cut for Real and Norway’s Sant & Usant. Its international sales have been entrusted to Tel Aviv-based outfit Cinephil.

more about: He's My Brother 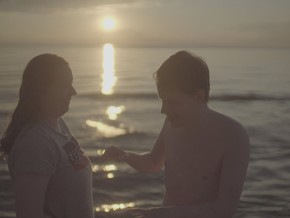