17/05/2021 - In his latest powerful feature film, Fisnik Maxville depicts the daily life of a modern-day Robinson Crusoe grappling with laws of nature which aren’t always straightforward

Crowned Best Film in the National Competition of this year’s Visions du Réel Festival, Nostromo [+see also:
trailer
film profile] imposes itself as an unyielding and mysterious work right from its opening frames. Indeed, Fisnik Maxville’s is an artistic stance which has no truck with compromise (thankfully). A year on from Fin de Partie, which was released on the French-speaking Swiss TV channel RTS in June of last year and which narrates the ups and downs of football coach Bernard Challandes as he takes on a decidedly risky challenge - coaching Kosovo, the youngest football team in Europe - Maxville has decided to embark upon a close-up observation of another character who swims against the tide and who isn’t afraid to put himself to the test. The result is Nostromo, an intense and aesthetically poetic documentary which scrutinises reality from a different, unexpected, and laudably destabilising viewpoint.

Having left France in the hope of living a life in total harmony with nature, Oliver set himself up, twenty years ago, on a small and remote island belonging to American Indians which lies 200 kilometres from Yellowknife, the only city to be found in Canada’s Northwest Territories. In the vein of an adventurer from times gone by, Oliver lives a frugal existence in close contact with nature, punctuated by fishing and the drying out of his catches, a ritualistic exercise which allows him to reconnect with Planet Earth. In this sense, the area where the fish are dried serves as a place of worship where Oliver can lose himself in ancestral rituals. The scene where he seems to dance in a trance-like state, observed, symbolically, by an audience composed of fish who hang upside down and await metamorphosis, is especially powerful and emotionally intense. The harmony which reigns between images and sounds, and between humanity and nature is, at times, reminiscent of the poetic and ritualistic world offered up by Maya Deren. Fisnik Maxville’s camera follows Oliver’s daily life without changing or influencing its progress, acting as some sort of companion who observes without passing judgement. By virtue of Fisnik’s distinctive approach, daily tasks - rare and almost confessional moments which see him chopping wood, cleaning his shack or brushing his teeth using water from a bowl - and the powerful beauty of nature which unexpectedly expresses itself via the magnificent Aurora Borealis, are transformed into moments suspended in time, where rationality and mystery intertwine amicably.

Although Oliver seems to exist in complete autonomy, the island is also inhabited, during filming, by three American Indians who have travelled here to hunt moose. One of the three is disfigured on account of a firearm incident and wears a balaclava to conceal his wounds. Their presence perturbs Oliver who appears, for a time, to lose his bearings. Despite admitting that he sometimes wishes he had neighbours to talk to, our modern-day Robinson Crusoe now seems too used to solitude to contend with the type of humanity which he decided to leave behind. Thanks to an alternated editing approach which creates thriller-worthy levels of suspense, Nostromo helps us to reflect upon the concept of colonisation and cultural appropriation. The encounter between Oliver (the European) and the three American Indians (the indigenous people) brings old wounds to light, alongside an historically constructed scepticism which proves impossible to escape. Outnumbered, the European finds himself occupying an uncomfortable position, awakening ancestral fears which he never knew were his.

Nostromo is produced by Genevan firm Close Up, who also hold the film’s international rights.

In his latest powerful feature film, Fisnik Maxville depicts the daily life of a modern-day Robinson Crusoe grappling with laws of nature which aren’t always straightforward

The Mexican-Ethiopian director Jessica Beshir won over the jury of the International Feature Film Competition, which has also awarded Les Enfants terribles and 1970 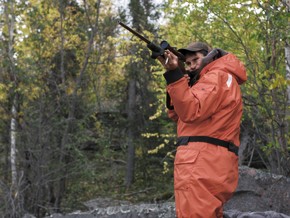