11/06/2021 - Arman T Riahi's juvenile prison drama, which opened this year's Diagonale, is an intense and unrelenting film with an excellent cast

Luna Jordan in Fox in a Hole

Arman T Riahi follows up on his 2017 hit comedy The Migrumpies [+see also:
trailer
film profile] with a very different film that nevertheless still touches upon some of his regular topics, especially immigrants and their place within the Austrian state. Fox in a Hole [+see also:
trailer
interview: Arman T Riahi
film profile] is set in a juvenile correctional facility and explores the effects of the system on the youth, while also serving as a microcosm of society.

A new teacher comes to the prison school, Hannes Fuchs (whose surname translates as "Fox"), played by Aleksandar Petrović. In his late thirties, this former drummer harbouring a dark trauma starts working alongside the older, cynical professor Elisabeth Berger (Ulrich Seidl regular Maria Hofstätter). Her teaching methods may be unorthodox, but they work in this environment and keep the students at least somewhat motivated: she lets them paint and occasionally takes them for little "field trips", like making apple strudel in the prison's kitchen.

The classroom is, of course, filled with troublemakers from all the strata of Austria's multinational society, who constantly pick on each other. One of them, however, Bosnian girl Samira (a fiery Luna Jordan), seems to be particularly problematic. She has ended up in the prison for putting her father in a coma, and keeps having anger problems. After an unwanted sexual advance bordering on assault from another inmate, she blows up and breaks his nose, ending up in solitary confinement. Her character is further complicated by a discovery that Fuchs stumbles upon when he visits her mum (Serbian actress Anica Dobra).

Fuchs is frustrated by Berger's freewheeling approach – he would like more structure to the classes. Conversely to many films with a similar setting, it is the younger professor who wants to bring in some order. But Berger won't budge, and the fact that the department head, a hard-boiled, nihilistic cop called Weber (Andreas Lust), tries to pit them against each other further raises the stakes.

In an attempt to get Samira, a ticking time bomb who barely ever speaks, to open up, Fuchs tries to collaborate with counsellor Ketabi (a surprise appearance from Sibel Kekilli), but she has her own ideas and methods. Eventually, the viewer gets the impression that the staff of the facility merely tolerate each other instead of ever really trying to work together for the benefit of the inmates.

The film almost fully takes place in the prison, except for a few scenes with Fuchs' former band, which hint at the nature of his trauma, and two visits to Samira's family. Riahi uses the claustrophobic setting to ratchet up the tension, with the facility's dark, metallic walls often closing in on the protagonists, and DoP Mario Minichmayr's handheld, very kinetic camera using subjective and skewed angles. All of this results in an intense, unrelenting picture – there is little respite from the constant emotional charge, which at times feels forced, almost as if mechanically induced.

The explosive young cast is instrumental for this approach to work. Their physicality and nervous energy charge up the viewing experience and give the seasoned actors, especially Hofstätter, some meaty material to play with. Petrović, on the other hand, has a different task, playing a tortured man who does not fit in either with the inmates or with the staff of the prison, but has the enviable talent of being able to get through to the difficult kids.

A society- and period-specific spin on a well-tested subgenre, Fox in a Hole is still very much its own animal. It was produced by Vienna-based Golden Girls and is handled internationally by EastWest Filmdistribution.

more about: Fox in a Hole

Interview: Arman T Riahi • Director of Fox in a Hole

“My film is an homage to how impactful teachers can be, but also how human and how broken they are”

As every year, the festival has bestowed a series of awards upon new talents from the young generation of German filmmakers, as well as several other prizes across different categories

Sebastian Meise’s drama about a homosexual man in Germany, who is locked up repeatedly owing to paragraph 175, has snatched eight gongs

The Austrian film-focused streamer intends to offer up to 1,500 Austrian titles in the DACH region, with plans to expand into non-German-speaking countries later on

Fox in a Hole pockets the Golden Olive in Lecce

The 22nd European Film Festival also awarded prizes to A Good Man and When I’m Done Dying, with Only Human bagging itself the Cineuropa Award

The 24th edition of the Diagonale kicks off 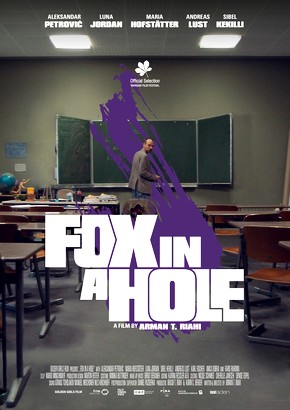