11/06/2021 - Actress Alison Kuhn uses this documentary to condemn the sexual assaults that she, together with five of her colleagues, fell victim to during a casting session

The 23rd edition of the German Film Festival in Madrid opened on Wednesday 9 June with the Spanish premiere of The Case You [+see also:
trailer
film profile], the feature debut by Alison Kuhn (Saarbrücken, 1995), who came along in person to present it at the Palacio de la Prensa venue in the city centre. This feature, which enjoyed its world premiere at the 2020 IDFA and picked up awards at Dok.Fest Munich and the Max Ophüls Preis earlier this year, joins the ranks of recent films and series that address – and condemn – cases of sexual abuse committed in the workplace.

Its 80 minutes of running time unfold in a unique space, set against a black background with very few props, such as empty theatre seats, a chair where the five victims (Isabelle Bertges, Gabriela Burkhardt, Aileen Lakatos, Lisa Marie Stoiber and Milena Straube) sit during the interviews that the director conducts with them, and the cameras, cables and spotlights you would find on a film shoot – in fact doubling as the set of this documentary. In this way, the doc builds up a reconstruction of the venue (a theatre) where the abominable events that Kuhn blows the lid off took place, while the court case meant to bring the perpetrator to justice has still not reached a conclusion.

Although the name of the accused is never uttered, we are informed that the result of those casting sessions, which were attended (in 2015) by these excited young actresses, ended up being turned into the content of a movie that was planned to be screened at a film festival, until the victims filed the ensuing lawsuit and everything ground to a halt (until now, that is).

These ladies were brave enough to confront the person who abused their position of power and manipulated their desire to work in the field they loved the most. While the protagonists explain in detail the harassment they suffered, and express their anger, disappointment, shame, fury, confusion and outrage, The Case You steadily takes a look at the different stages they passed through after such an unpleasant and traumatic experience. But in the end, after taking part in this cathartic documentary, talking about what happened and raising awareness of it so that it never happens again, they attain – through this cinematic group therapy – something akin to liberation and inner peace.

And so Kuhn’s lens serves as an intimate witness to these verbal reconstructions, interspersed with moments of performance, when the actresses stand up to that same camera that they used to consider their means of expression, but which, in this particular case, instead of being a friend or an ally, at times turned into an enemy, a monster that they face up to and defy in search of that universal respect that will eradicate physical and psychological abuse once and for all, not only in the professional sphere, but in any other area of life you could think of. And to which we contribute, as underlined by the director, by staying in a state of silent complicity.

The Case You is a production by German outfit Filmuniversität Babelsberg Konrad Wolf, which is also in charge of its international sales.

more about: The Case You

Actress Alison Kuhn uses this documentary to condemn the sexual assaults that she, together with five of her colleagues, fell victim to during a casting session

The best of recent German cinema descends on Madrid

The 23rd German Film Festival is unspooling in the Spanish capital from 9-13 June, boasting enticing premieres such as The Case You by Alison Kuhn 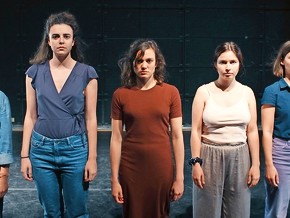