Tom Stourton in All My Friends Hate Me

After England’s win against Croatia in the group stage of Euro 2020, the UK’s Andrew Gaynord (the director of the Netflix comedy series The Characters) also plays a good debut game with his first feature, a grotesque, dark comedy entitled All My Friends Hate Me, which has world-premiered in the International Narrative Competition of this year’s Tribeca Film Festival.

The premise of this surprising flick, penned by Tom Palmer and Tom Stourton (known as comedy duo Totally Tom), is actually quite simple. Pete (played by Stourton), a man in his early thirties, is back from some volunteer work with refugees and cannot wait to enjoy his birthday party with a bunch of ex-college mates, for the sake of experiencing – at least for a couple of days – the good old days again. Pete will meet his friends in a country manor: they are George (Joshua McGuire), the owner of the majestic property; George’s wife, Fig (Georgina Campbell); Archie (Graham Dickson); and Pete’s ex-girlfriend, Claire (Antonia Clarke).

But don’t expect a “Millennial-set” class reunion of the likes of Lawrence Kasdan’s dramedy The Big Chill, Ted Demme’s romance Beautiful Girls or even the not-so-well-known bittersweet humour of a 1980s Italian comedy (Carlo Verdone’s Compagni di scuola). Luckily enough, All My Friends Hate Me is cut from an entirely different cloth. First of all, Pete, on his way to the manor, already witnesses two weird events. After stopping for a quick pee break, he approaches an abandoned, rusty car, which is seemingly empty, and ends up being chased by a man who was actually sleeping or lying inside the vehicle. Later, he stops an old man to ask for directions, but the passer-by’s answers and attitude appear rather awkward. Once he reaches the manor, he finds it empty. A few hours later, his friends come back, with one more guest in tow, a stranger called Harry (Dustin Demri-Burns).

From that moment on, the story spirals – gradually but inexorably – into a tale of paranoia where Pete and Harry take centre stage, and the former becomes increasingly convinced that the latter is there to ruin his birthday party, his friendships and indeed his life altogether. Their conflict escalates in unpredictable – yet funny and creepy – ways. The next day, Pete’s girlfriend Sonia (Charly Clive) will join the group, and her presence will end up making things even more unstable. Pete’s insecurity and frailty make the piece very timely, in a world where the consumption of psychotropic drugs and mental health issues are on the rise. And, of course, Millennials are not exempt from this trend of growing anxiety, the effects of which are being amplified by the lack of prospects caused by the coronavirus crisis. Here, the tropes of the horror and thriller genres add a much-needed, surreal touch of anguish, carefully planned as part of a bigger, overarching directorial strategy.

In summary, Gaynord’s debut is an entertaining, surprising effort. Despite some slight narrative slowdowns in the first third of the film, which nevertheless still gives an overall sense of cleverly constructed, creeping tension, the picture boasts a dazzling ensemble of actors, nifty writing and great technical skills. Speaking of which, it is worth mentioning DoP Ben Moulden’s efforts, as he has done some splendid work on the low-key lighting to depict the ambiguity of the manor and its guests.

All My Friends Hate Me was staged by British outfits Ravanburn and Totally Tom Films. US-based firm Endeavour Content is selling the title internationally.

more about: All My Friends Hate Me 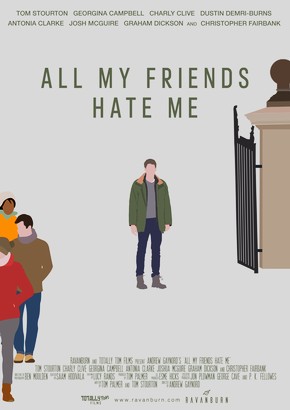