The delights to come are not immediately apparent as we open with a scene in a Tbilisi bar, where guys are arguing over a football match. It's the kind of nonsensical argument fuelled by bravado and one-upmanship that can only have an unhappy ending. The immediately recognisable situation introduces us to a world where ego leads to demise. None of these guys is likeable, so it's a relief when it turns out that we are yet to meet our main character.

Kakhi (Tediashvili) is the guy you call to fix problems. It turns out that the one causing a ruckus in the bar was Kakhi's brother, whose life has reached such a nadir that he's now homeless. So Kakhi sets about rescuing him, and does so by finding him a job and a home in the gym.

However, just when we think we know where the film is heading, Kakhi's wife is packing his bag for New York City. When she loads his suitcase full of cheese and foodstuffs, it's the first reveal that this will be a story that captures the immigrant experience, a tale that will show the tough battles one faces to settle in other lands, and also the love and sense of community that holds people together in hard times.

Greek-born cinematographer Phedon Papamichael has twice been nominated for an Academy Award – for The Trial of the Chicago 7 and Nebraska – and here, he once again shows his ability to capture cities in unique, interesting and revealing ways. This New York is far from Manhattan's skyscrapers that have become the cliché, taking us instead to Brooklyn's Brighton Beach, where a community of Georgians have settled in cramped housing. These folks are desperately trying to make a buck and stay sane. While the street signs are in English, these immigrants have forged lives that replicate the existence they left behind in the Caucasus. The interiors do not look too different to those Kakhi has left behind. Did he need to bring so much cheese when it's readily available here? And what happened to the American Dream?

The idea that it's difficult to escape your lot in life soon becomes apparent in the personal life of Kakhi as well. He's come to visit his son, Soso (Giorgi Tabidze), only to discover that his offspring has been lying about going to medical school, has his own gambling debts and is trying to marry the long-suffering Lena (Nadezhda Mikhalkova) for a green card. What's remarkable is that while the gambling plot plays out in the way one might expect, it unfolds in such a surprising and arresting manner that one barely thinks of gangsters at all.

Beyond his touching scenes between father and son, Kakhi tries to protect his wife from their son's problems over video calls, and strikes up friendships with Lena and his fellow Georgians. Even the scenes of singing songs from the old country, which could so easily have seemed crass, are perfectly pitched. Koguashvili deserves all the plaudits he can get for this movie that builds up a picture of Kakhi's kind nature through clever scenes and the avoidance of over-plotting.

“I strongly believe in faces” 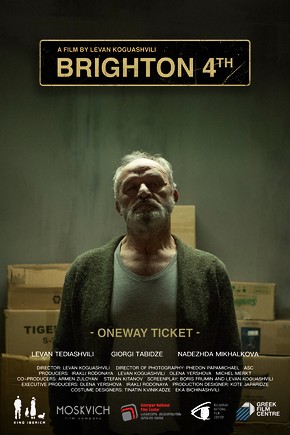