Being forced into a pandemic lockdown in a Rome apartment with an African snake escaping from its case that wanders among the furniture. What more could you ask for in a very, very dark comedy? Or in a very brilliant tragedy, as the film's press notes suggest?

#stayhome [+see also:
trailer
film profile] is the fourth feature film by Roan Johnson, an intelligent Tuscan screenwriter and skilful director born in London from an English father and Italian mother who has so far written witty and passionate comedies that spoke of daring escapes in the 70s, teenagers struggling with unexpected pregnancies, last weekends with friends that turn into a transition to adulthood. And in a way, #stayhome is related to his 2014 film Fino a qui tutto bene [+see also:
film review
trailer
film profile], the story of the last three days of five friends who studied and lived in Pisa in the same house, featuring unseasoned spaghetti, quarrels, envy, loves and other pains. This film however pushes the grotesque further and takes situations to the extreme to ambitiously create an existential paradigm in a work which the director describes as his most personal to date.

Paolo (Dario Aita), Benedetta (Giordana Faggiano), Nicola (Lorenzo Frediani) and Sabra (Martina Sammarco) are the four characters, all under thirty, in a film which belongs to the new international category of “lockdown movies.” Claustrophobic, tight, overloaded with sharp and fast dialogues, rich in long takes very well shot in small enclosed spaces, to the point where watching the film almost feels like watching a play (it could easily be turned into one), #stayhome sardonically sinks during its 110 minutes into a moral abyss. Johnson does not miss anything, from the explicit representation of evil through the terrifying snake (“otherwise, in Eden, they would send us a hamster,” jokes one of the boys) and the acid trip from an ancient African tradition (Sabra is a Black girl who works in welcoming refugees), to the wildest greed, unleashed by the presumed presence of a Sicilian mafia boss wanted by police all over the world. The host of the boys, their neighbour, is in fact an ambiguous and greedy Sicilian gentleman (Tommaso Ragno, who seems to be having a lot of fun, especially when playing dead in the second half of the film), who offers the shrewd Benedetta a discount on the rent in exchange for sexual favours. Jealousy and slightly exasperated violence break out, and a safe containing a gun, fake passports and a lot of money will certainly not lead to a rosy ending. The small cast is completed by the slimy doorman of the building (the iconic actor from the first films of Nanni Moretti, Fabio Traversa) and by an enterprising cleaning lady (Natalia Lungu).

#stayhome recalls those hilarious Anglo-Saxon black comedies where the corpses pile up, although those films usually eschew philosophical interpretations. Roan Johnson looks rather to Polanski: no one is innocent, the virus of the world is humanity itself, and most of all, young people are very, very confused. 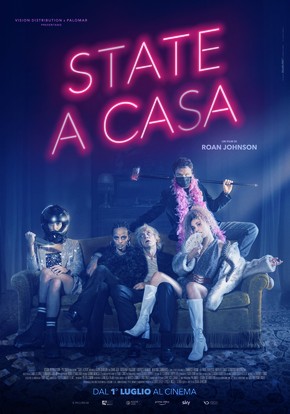 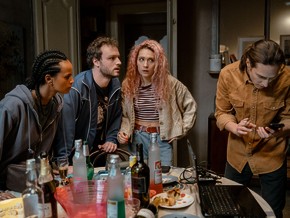