Annes Elwy in The Feast

Lee Haven Jones’ first feature The Feast [+see also:
trailer
film profile], which is shot entirely in Welsh (a rare enough feat to warrant pointing out), is a film which surprises and captivates by way of a troubling yet poetic atmosphere which sucks the viewer into an inescapable vortex of horror. Having been selected for the Midnighters section of the SXSW 2021 (virtual edition), it’s now the turn of the Neuchâtel International Fantastic Festival (NIFFF) to welcome the Welshman’s first, bewitching work into its International Competition, offering up an effective and deliciously destabilising synthesis of cruelty and beauty, and of reality and the supernatural, which seems to want to remind us that nothing is truly as it seems and that grey zones can gain the upper hand at any time. Lee Haven Jones reveals the contradictions of our society, one which is based on profit and the destruction of the nature around us which we believe belongs to us by rights. But what would happen if she decided to rebel? What consequences might we expect? The Welsh director tries to answer these questions in The Feast, presenting his own, personal version of events. The result is powerful and frightening, a sanguinary warning in keeping with the environmental issues affecting our lives today.

A seemingly straightlaced family are preparing a banquet in a luxurious residence in the Welsh countryside. Perfectly in tune with the ambitions of a typical, patriarchal, heteronormative family, this picture is tainted by the troubling presence of a discreet maid, Cadi (the captivating and magnetic Annes Elwy), who has been hired to help the lady of the house prepare the gargantuan meal. We subsequently learn that the two sons actually harbour socially disturbing personalities: Gweirydd lives only to compete in triathlons and has a tendency towards narcissism which is fast taking on manic obsessive proportions, and Guto dreams of escaping the country abode in which his parents are “detaining” him and carrying on with his life full of excesses in London. The family’s dinner guests consist of a local businessman who helped the family get rich illegally and a neighbouring farmer whom the hosts hope to convince to sell them a piece of land which is considered sacred and untouchable by the local community.

The Feast is a film which reveals its dark side little by little, without haste, in a game of cat and mouse whereby the audience is aware of the danger and tries to hide, despite knowing it’s going to get caught. The movie’s increasingly angst-ridden atmosphere is amplified by the destabilising world of sounds engulfing it, combining silences with traditional Welsh songs (the chant sung by Cadi as she prepares the meal is particularly unforgettable). Lee Haven Jones chooses to keep dialogues to a minimum, providing his actors with the space they need to physically express their often anguished and anxious states of mind. The mega-modern home in which the family sporadically lives (they spend most of their time amidst the frenzy and glamour of London) - a technological bunker, of sorts, in sharp contrast with the natural wilderness surrounding it - becomes a character in and of itself. Its unapologetic and brutal presence, and the absence of any form of interaction with the landscape accommodating its foundations becomes a metaphor for the ambitions of the family within, who are prepared to do anything to increase their wealth and to impose their consumerist dominion. The Feast might be said to portray a perverse form of eco revenge, where nature reveals her glorious and combative side in a bid to take back control.

The Feast is produced by Joio, based on a Ffilm Cymru Wales initiative supported by S4C and BFI, and Fields Park and Great Point Media in association with Melville Media. Bankside Films are managing international rights.

more about: The Feast

Lapsis and Tides dominate the winners’ list at the NIFFF

The champions of the festival’s hybrid edition include US director Noah Hutton’s work, the title by Switzerland’s Tim Fehlbaum, and Boys From County Hell by Ireland’s Chris Baugh

The festival is celebrating its jubilee with fifty or so feature films, eight short film line-ups, eight immersive installations and two TV productions 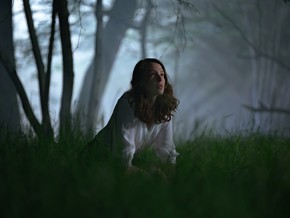