11/08/2021 - Bonifacio Angius returns to the Locarno Film Festival to present his latest, quirky feature film, painting a comical and decadent portrait of masculinity which is on the verge of implosion

Bonifacio Angius and Michele Manca in The Giants

Seven years after the success of Perfidia [+see also:
trailer
film profile], Italian director Bonifacio Angius has once again been selected for the Locarno Film Festival, on this occasion the International Competition, where he is presenting his latest, surreal and ferociously independent feature film The Giants [+see also:
trailer
interview: Bonifacio Angius
film profile], signing his name to the movie’s direction, screenwriting, photography, editing and production. What distinguishes this most recent work of his is the freedom with which he tells the story, which is full of fury and anger but also tenderness, fragility, irony and dark humour. The Giants is an intense and unsettling film which explores the consequences of wanting (or having) to belong to the hegemonic male grouping, of having to renounce your own weaknesses in the name of privileges which would otherwise lie out of reach.

A get-together between old friends who share an excessive passion for artificial paradises, a deteriorating villa lost in the middle of the countryside, and an insatiable thirst for living in the present and momentarily forgetting the wounds of a past which hangs around their necks like a millstone: this, in short, is the world of The Giants. This diverse group of friends decides to spend what might be their last evening together in an atmosphere of unbridled hedonism: drugs, alcohol and dark, Nietzsche-style, pseudo philosophical discussions; an evening occasionally reminiscent of the bombastic world of La Grande Bouffe by Marco Ferreri (another director who made hegemonic masculinity his primary target) and the razor-sharp wit of Aki Kaurismäki; an evening which will see masks fall to reveal real faces (or should we say grimaces) and inner worlds free from the constrictions of a society which values men above all else, real men who are untouchable and cold as ice. The Giants might be described as an ode to impotence; impotence of a social rather than a sexual kind, which drives the characters to reveal their own weaknesses and wounds, potentially for the first and last ever time; impotence which turns into a destructive but also a cathartic strength, no longer seen as a flaw to be cured via excessive doses of blue-coloured pills. With The Giants, Bonifacio Angius seems to want to confront us with a masculinity that’s teetering on extinction, having fallen victim to its own sad privileges.

The film’s five characters, played with zest and realism by a cast of high calibre actors (Stefano Deffenu, Riccardo Bombagi, brothers Michele and Stefano Manca [alias Pino e gli Anticorpi] and the director himself), each have a singular way of approaching life: ignoring it after a first devastating disappointment in love, tackling it with abyss-like levels of anger, only indulging in its artificial side, thinking too much about it, or, contrarily, accepting its flaws. What unites the five friends, in spite of their clear differences (and drug dependency aside), is their inability to find an escape route or any kind of short cut which will allow them to escape the vicious circle of egoism and toxic masculinity. Cooped up in a villa which seems to imprison them within their own hallucinatory delusions, our five anti-heroes are no longer able (perhaps they never were able) of translating their anxiety into words. Instead, they become victims of it, bodies which are slowly consumed by the weight of emotions burning inside of them like a sacred fire. Despite philosophical ravings which sometimes border on pretentious, The Giants is a film which bravely reveals the darker side of giants who have been turned into monsters by society.

The Giants is produced by Il Monello Film (Italy) and is sold worldwide by Coccinelle Film Sales.

more about: The Giants

“The Giants is a declaration of love”

The Tale of King Crab crowned at Annecy Cinéma Italien

Bonifacio Angius returns to the Locarno Film Festival to present his latest, quirky feature film, painting a comical and decadent portrait of masculinity which is on the verge of implosion 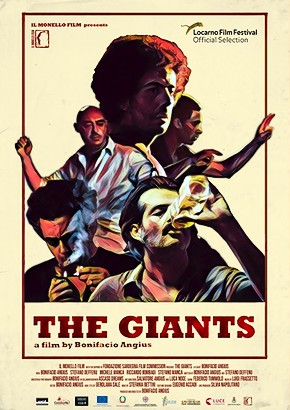 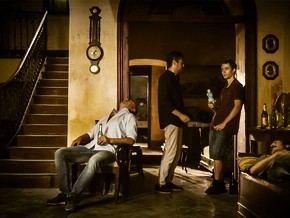