24/08/2021 - The sophomore feature by Lithuanian director Andrius Blaževičius, having its world premiere at Karlovy Vary, is a breathless examination of the limits of love, freedom and sacrifice

After his debut feature, The Saint [+see also:
film review
trailer
interview: Andrius Blazevicius
film profile] (2016), proved a relative hit – premiering at Busan and enjoying domestic box-office success – Andrius Blaževičius returns with Runner [+see also:
trailer
interview: Andrius Blaževičius
film profile], which has world-premiered at the Karlovy Vary International Film Festival, in East of the West. While the social-realist tropes that typified his first feature are still very much evident, the Lithuanian director expands his vision to present a slightly more off-kilter world with the smallest hints of magical realism.

Our titular runner is Maria (Žygimantė Elena Jakštaitė, one of this year’s EFP Shooting Stars – watch the interview), whose boyfriend Vytas (Marius Repšys) seemingly goes missing after undergoing something of a mental breakdown. She takes to the streets of Vilnius, running from place to place, trying to find his whereabouts. Using social media and friends, she just keeps missing her other half and becomes increasingly frantic as she worries about what he will do to himself. But as the two have closer encounters later on in her busy day, Maria must confront the limits of her love for Vytas and how much she must sacrifice of herself for him.

At first, it seems as though the whereabouts of Vytas will remain an enigma, with Runner heading into a territory exploring absurdist notions of how people attempt to continually chase something that is ultimately intangible – a sort of “Running for Godot”, as it were. But the fleeting moments when he enters the narrative later on in the film turn it into a treatise on how people tend to blur the lines between happiness and self-sacrifice. Both Vytas and Maria are seemingly far from the definition of a “happy couple”, both clearly dealing with a multitude of issues. How far is Maria’s obsessive chasing of him – despite her ostensible noble intentions – damaging to them? At what point does love become harmful? While these notions are filtered through the experiences of the protagonists, it’s clear that Blaževičius is applying these to society as a whole. News reports mention Russia. There are a few shots of troops on the streets. How much must an entire nation sacrifice – in the face of increased fear and aggression – before it becomes untenable?

The film deals with many other issues – including mental health and the pervasiveness of social media, amongst other things – and it becomes a heady brew of thoughts, ideas and philosophical musings. This would often be overwhelming, but here it suits the mood of the film well. There’s a sense of chaos, of energy that creates an interesting juxtaposition with the more realist elements such as the grey, urban locations. Blaževičius makes sure that the camera is constantly moving, creating an ever-present sense of forward momentum, while there are a few moments that flirt with surrealism. These include a black dog that seemingly appears wherever Maria does. The symbolism here is rife – the “black dog” being an infamous metaphor for depression – but it also reflects how, in times of stress, we tend to see the world in terms of portents and omens.

Much of the success of the film is also due to Jakštaitė’s lead performance. There’s a toughness and hardness here, and she’s unafraid to add a streak of the unlikeable to her character. Yet there’s also vulnerability on offer. There’s a constant nervous energy about her, but she manages to rein it in enough that it never becomes over the top or showy.

Blaževičius ventures further down his path of being one of the most interesting young directors in Lithuania today, with Runner continuing to show that the director has both an empathetic touch and a knack for exploring contemporary issues.

Runner was produced by M-Films (Lithuania), and the co-producer is Bionaut (Czech Republic). Its sales agent is Alief.

“When we were presenting the film to some industry players, they would say: ‘Why is she running?! It’s nonsense.’ But is it?”

The Lithuanian director might be showing his film in the East of the West competition at Karlovy Vary, but whatever you do, just don’t mention Tom Tykwer to him

The sophomore feature by Lithuanian director Andrius Blaževičius, having its world premiere at Karlovy Vary, is a breathless examination of the limits of love, freedom and sacrifice 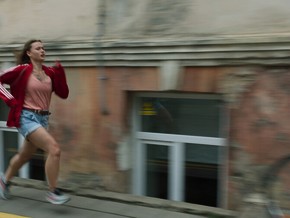 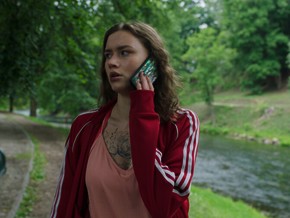