Given that Jan Foukal is better known in the music world under his pseudonym Johannes Benz, it's no surprise that music plays a big part in Two Ships [+see also:
trailer
interview: Jan Foukal
film profile], his first narrative feature film as a director, which is playing in the East of the West Competition at the Karlovy Vary Film Festival. Foukal previously made a documentary, Amerika, which competed at the event in the Czech spa town in 2015. It was about the phenomenon of Czech tramping, which describes people who reject the rush of modern life to seek out liberty, whatever that might mean to them. In Two Ships, the characters could not have a more different experience. They are stuck in modern life, and the relationship is at times like a prison, which takes a mental and physical toll. The filmmaker describe Two Ships as a romance, but that's like saying bare-knuckle street fighting is a sport.

This romance between a psychologist and a musician is inspired by a collection of poems, titled Two Ships, written by Alena Černá, who died in 2017, and Martin E Kyšperský, a musician from Kvēty. The poems are based on recollections and the personal experiences of Kyšperský, and that experience is accentuated here by the decision to cast Kyšperský as Martin. Opposite him, Eliška Křenková plays psychologist Eliška, who opens the film by saying, “Ciao,” seemingly breaking the fourth wall. She then steps out of a car and walks across some railway tracks. It's heart-in-the-mouth stuff, but there is no reason to fear, as Eliška is just heading to a birthday party in an abandoned part of Brno railway station. The psychologist is on a mission to invite lead singer Martin to give out a prize at a lecture.

Something is beguiling about the difference in physicality between Eliška and Martin. He is tall and kind of ugly, while she is a beautiful, petite pixie. When they stand next to each other, the height difference represents the emotional distance between them, even when they fall in love. They seem to suit each other, but they are far from perfect for each other. It's so against the grain of what one expects from a love story that it sometimes feels like hard work, but this sensation will be vital, as it mirrors the state of Eliška, who is suffering from a long-term physical illness. There are a lot of awkward moments and jumps. Martin invites a girl to watch a movie with them, causing Eliška to storm off, but there is no reunion scene before they are back together. Martin is a man of few words, so Eliška has to find truths in his lyrics. His affection for her is apparent when he entertains the idea of Eliška joining their band, even though she can't sing. There is something incredibly upsetting and frustrating watching a relationship that seems destined to fail. The couple are hard to watch and barely seem attracted to each other.

It's languid, but perseverance, for those not turned off by the protagonists’ lack of gusto, will eventually provide an ending that is a pay-off for the first scene. It's a crushing film, like listening to a sad song, and the feeling of melancholy is paramount. Two Ships is a romance for those unconvinced that love conquers all and who believe that a couple is just two individuals who have as yet not drifted apart.

Two Ships is a Czech-Norwegian production staged by Film Kolektiv and co-produced by Storm Films.

Jan Foukal's movie, based on a book of poetry, is a love story full of songs but not much affection 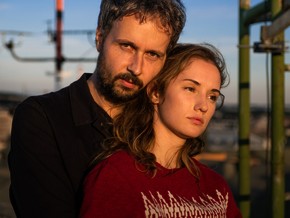 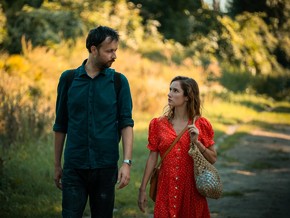