04/09/2021 - VENICE 2021: Bad romance blooms in director Harry Wootliff’s follow-up to 2018’s Only You, helped by sublime performances from Ruth Wilson and Tom Burke

If his brooding visage appears on your dating app of choice, or if he offhandedly asks you out in public, be sure to give Tom Burke the widest of berths. In a coup of self-aware casting, rising British filmmaker Harry Wootliff has cast him, in her sophomore effort True Things [+see also:
trailer
interview: Harry Wootliff
film profile], as yet another mercurial, apparently irresistible scoundrel, following up such roles as the junkie paramour in The Souvenir [+see also:
film review
trailer
film profile] and none other than Orson Welles in Mank. He’s the near-phantom presence encircling Ruth Wilson’s Kate, and she’s alternately repelled and entranced. This is a relationship study that cuts deeper than most, utterly confident and sincere in its telling of what some people might dismiss as ‘first world problems.’ It premiered on the first Saturday at this year’s Venice International Film Festival in the Orizzonti section.

Kate’s begrudgingly-taken profession as a job centre worker requires her, as T.S. Eliot wrote, ‘to prepare a face to meet the faces that you meet.’ With her own life in an underachieving thirty-something limbo, the irony of her instructing others into fulfilling employment is not lost on us. But in walks a guy (Burke, his character’s name teasingly unspecified in the film) with a messy, punky blonde dye job, and a short prison sentence for a petty offence to boast of. Suddenly, the routine question-and-answer session begins to feel like speed dating, under the cover of dull open plan office furnishings.

So begins a passionate yet intermittent courtship, replete with ghosting, gaslighting, stalking, and manipulation — all the modern terminology we now use to explain relationship power dynamics. It’s really an exhaustive character study of Kate, unflinching about every aspect of her life, whilst Burke’s character shifts shape, verifiability and temperament in almost every interaction with her. The ‘true things’ referenced in the title appear to refer to our rapport with Kate as an audience: not a thing about her vibrant mess of a life, endearing or not, is hidden from our sights.

Wootliff’s filmmaking choices impress to a greater extent than her more functionally-shot Only You [+see also:
film review
film profile],  released in 2018. True Things is shot in the square Academy ratio by Ashley Connor, who previously did eye-catching work for the left-field US indie filmmaker Josephine Decker. It’s not an affectation: the camera peers affectionately at Kate in her many scenes of solitude, without making her look like a victim at odds with her environment. And then the gamey cinematography serves a storytelling function, as it later depicts the high and aftermath of an impromptu ketamine trip, with urgent shakes and rainbow lens flares.

There are some overlaps in True Things with recent tales of late millennial romantic woe such as Fleabag, but Wootliff’s work has more in common with Andrea Arnold and Lynne Ramsay, particularly the latter’s Morvern Callar [+see also:
trailer
film profile]  — with which it shares a third act trip away from the UK, and a judiciously chosen soundtrack of hip alternative music. The ultimately optimistic aura of Wootliff’s film pivots on Kate’s youth: her future and belated maturation offers new hope, where she can fully consign those pesky Tom Burkes of her life to the fleetly receding past.

True Things is a UK production staged by Tristan Goligher of The Bureau, Ben Jackson and Jude Law of Riff Raff Entertainment, and Ruth Wilson for her own outfit Lady Lazarus Productions. BBC Films and the BFI also co-produced. International sales are by The Bureau Sales.

“I love music and image; I definitely try to work out how I can make space and have music in the film”

VENICE 2021: We met the rising British filmmaker on the occasion of her second feature’s premiere at Venice, where she expounded on shaping performances as well as a kicking soundtrack

Crystal Arrow for the film from Slovak filmmaker Peter Kerekes, Audience award for Hive, Swamy Rotolo and Laure Calamy for best acting, and the Cineuropa award for Full Time

Rhino and Lioness round up top Horse awards in Stockholm

VENICE 2021: Bad romance blooms in director Harry Wootliff’s follow-up to 2018’s Only You, helped by sublime performances from Ruth Wilson and Tom Burke 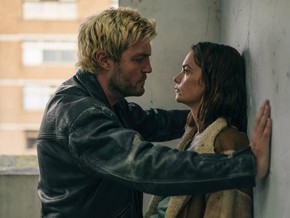