Review: Once Upon a Time in Calcutta

Once upon a time at the Venice Film Festival - earlier this week in fact - we were greeted with the premiere of Once Upon a Time in Calcutta [+see also:
trailer
film profile], the Indian director Aditya Vikram Sengupta's second film at the festival after his career breakthrough Labour of Love in 2014. Like that award-winning effort, he continues reaping inspiration from Wong Kar-Wai's In the Mood for Love, but where his debut eschewed dialogue of any kind, this film has a large ensemble cast criss-crossing and interacting in an ornate narrative arabesque. In spite of the title’s inference, fairy tale this is not: it lives up to and evokes the two Sergio Leone films of similar names, and finds a pathway towards similar tragedy and loss. It was selected in the Orizzonti section, where it was shown in the festival’s second week.

With an eerie fade-in, in tiny-lettered, white sans-serif font, we learn at the film's onset that this was 'inspired by true events.' Whilst there is no suggestion as to what particular events these were, and audiences unfamiliar with recent history in the West Bengal capital may be further perplexed, we can still gauge how this film was motivated by a kind of anger on Sengupta's part, with Kolkata yet another major city afflicted by mismanagement in urban development, hastening growing social polarisation. To borrow an observation from American critic Jonathan Rosenbaum on the films of Claire Denis: looking at how Sengupta has devised the film's characters, we could conclude that he loves 'people,' but dislikes or sometimes looks askance at humanity. This also gives Once Upon a Time in Calcutta the feel of a 19th-century novel, apt as this sense also permeates India’s more serious (compared to its popular cinema) literary culture.

Ela (Sreelekha Mitra) is our focalising character: a middle-aged host of a spirituality-oriented television show, she has been recently bereaved of the young son she had with Shishir (Satrajit Sarkar), who works on the construction portfolio that the holding company, who run her television show, also has. His actual work duties involve dismantling a surreal statue of a dinosaur, to make way for a large bridge - a supposed symbol of social plurality in the divided city. Circling round this primary pair is Ela's beautician Pinky (Reetika Nondini Shimu) and her boyfriend Raja (Shayak Roy) who works as a strange kind of crowd-funder for the aforementioned conglomerate, seeking donations from locals which will go towards paying for the bridge and other new builds - this is later revealed to be a sinister Ponzi scheme.

There are numerous romantic entanglements, and a bit like a Twin Peaks-esque nighttime soap opera, every character seems to be having a secret affair, or is revealing a baroque past history with the other. But as this plotting starts to overpower film, it springs to life again in the third act, and we realise Sangupta's accusatory endgame towards the mendacious powers-that-be. Once Upon a Time in Calcutta - named with the old spelling of the city for its nostalgic pull (as an Indian critic of the film observed) - seems part of a generation of new Indian art cinema, along with recent Venice winner Chaitanya Tamhane, reintroducing the nation’s filmmaking to the festival circuit. Yet there's still the sense that this small movement is ironing out its identity and fixations, and its masterpieces lie rather in its future.

Once Upon a Time in Calcutta is a co-production of India, France and Norway, from For Films (the production house of Aditya Vikram Sengupta), Wishberry Films, DUOfilm and Catherine Dussart Productions.

more about: Once Upon A Time in Calcutta

Review: Once Upon a Time in Calcutta 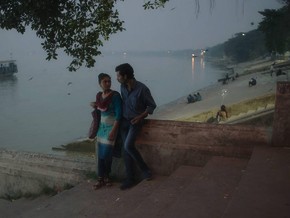