Former journalist Dina Amer's You Resemble Me [+see also:
trailer
interview: Dina Amer
film profile] is tour-de-force filmmaking that defies conventions in its search for the truth about what makes us the people we are. It is “people”, and not “the person”, we become because different sides to personalities appear in different situations, ensuring that different realities and behaviours come to the surface. The film shows how children of migrant families in Europe are constantly code-switching, acting in one way to please their family at home and then another to keep up with their friends. This often leads to confusion, frustration and heartbreak. It's in this space that Amer's film, playing in the Giornate degli Autori at Venice, operates.

The movie is about Hasna Aït Boulahcen, falsely named in the media as Europe's first female suicide bomber following the November 2015 terrorist attacks on Paris. However, what lies ahead is not immediately apparent, as initially, the story takes us back to her troubled childhood in the suburbs of Paris. In scenes reminiscent of Sean Baker's The Florida Project, in both the aesthetic and the sentiment, Amer shows children who find solace in each other's company in troubled and desperate situations. A young Hasna (Lorenza Grimaudo) and Mariam (Illona Grimaudo) are sisters trying to grapple with the complicated demands and whims of a troubled mother who is struggling to cope. The young girls decide to run away, and after a brief sense of freedom and release, it's soon apparent that whatever world the girls operate in, there are dangers everywhere. The police catch up with them, take them away from their mother, who is on a watchlist for poor parenting, and split the girls up, sending them to separate foster homes.

Amer never provides a moment of comfort for either the protagonist or the viewer. Just as it seems like the film has unveiled its hand, it takes a sharp jump to 2015 and bears witness to the challenged human that Hasna has become. What's remarkable is how Amer refuses to follow tropes or stick to established cinematic practices wherein one aspect of a person's personality is proffered as being someone's true essence. Amer has three different actresses playing Hasna, one of whom is the director herself. She is seen at work in a burger store, out partying, and on social media. It's casting that follows the same school of thought as Todd Haynes' I'm Not There. Amer chooses actresses who look similar to each other, reinforcing this idea of resemblance and that there is some universality to the story. One of the ideas at play is that talking, airing stories and being honest about the lives led will allow younger generations growing up in Islamic households in the West not to feel so alienated by their confusion. Others are going through the same thing.

The catalyst for Hasna veering off course is the Charlie Hebdo attacks. Hasna's reaction is to vent her frustrations of feeling othered by following a link to ISIS posted by her cousin, Abdelhamid Abaaoud, who would mastermind the Bataclan attacks. He starts grooming Hasna. The dysfunctional family, othering, abuse, prostitution, and a lack of a safe space are all part of Hasna's tragedy in this knockout work that refuses to toe the line of conventional thought in the story it tells or in the style in which it tells it.

You Resemble Me is an Egyptian-French-US co-production. It is a The Othrs and VICE/RYOT presentation in association with Quiet and Level Forward, in co-production with Hameda's Stories and Dartagnan. The Match Factory handles the international sales.

more about: You Resemble Me

Interview: Dina Amer • Director of You Resemble Me

VENICE 2021: The Egyptian-American journalist presents a potent, dramatic film that explores the roots of the trauma suffered by a young Maghrebi woman and a decision that will shake the whole world

Yuri Ancarani’s Atlantide reigned supreme when it came to the festival’s awards, at the close of this successful 12th edition 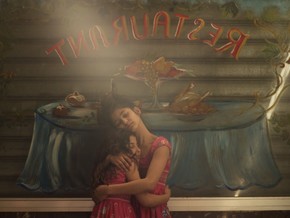