SAN SEBASTIÁN 2021 Out of Competition

27/09/2021 - After Cannibal and The Motive, which took part in previous editions of this festival, Manuel Martín Cuenca returns to lay bare the meanness hidden behind the most obsessive of desires

Irene Virgüez Filippidis in The Daughter

Manuel Martín Cuenca is an affable, relatable and friendly man, which doesn’t stop many of his films from delving into dark subject matter and turning out as well-observed X-rays of the more sinister side of humankind – or perhaps it’s precisely because he’s so nice. This was the case for Cannibal [+see also:
film review
trailer
interview: Manuel Martín Cuenca
film profile], featuring a serial-killer protagonist, which was vying for the Golden Shell in 2013. It was also applicable in the case of The Motive [+see also:
film review
trailer
interview: Manuel Martín Cuenca
film profile], which also did likewise in 2017, about a would-be author (just like his ex-wife) capable of interfering in other people’s lives in order to achieve success and garner acclaim. Now, The Daughter [+see also:
trailer
film profile] is one more example of this. The film, starring Javier Gutiérrez, just like The Motive, has been presented in the official section of the 69th San Sebastián Film Festival, but out of competition.

Many voices have been raised, clamouring for this feature to be competing for the gathering’s awards, given its lofty level of creativity. During its two-hour running time, the Andalusian filmmaker once again demonstrates his absolute mastery of pacing (which is well-measured and atmospheric), framing (the beauty of some of the shots is a stark contrast with the brutal storyline) and direction of the actors, as they are all in perfect harmony with their unpleasant, calculating and cold characters.

The protagonists are a married couple with no children (Gutiérrez and Patricia López Arnaiz, who won the most recent Goya Award for Best Actress for her work in Ane Is Missing [+see also:
film review
trailer
interview: David Pérez Sañudo
film profile], and who is just as magnificent here with just a few lines of dialogue but a striking presence), who reach an agreement with a troubled teenage girl, a huge fan of TV game shows revolving around dating, couples and… the fights they have (played by Irene Virgüez, selected after a lengthy casting process and acting in a film for the first time), who has got pregnant, so that she will hand the baby over to them in exchange for a huge stack of money. All of this is hidden from the world and concealed not only from the beady eye of the police, but also from the girl’s boyfriend (Sofian El Ben).

With this storyline – which is at times surprising, and at others predictable, and was written by the director together with Alejandro Hernández (who also co-penned La Fortuna [+see also:
trailer
interview: Alejandro Amenábar
series profile], Amenábar’s series that has also been presented at this same gathering) – bristling with tension, Martín Cuenca once again picks apart the more mean-spirited side of the human condition, based around the irresistible urge to achieve a certain goal: in this case, to have offspring. Something so basic and animalistic can easily drift into obsession and envy, and drive people to perpetrate disgraceful acts, such as lying, kidnapping and manipulation. The director serves all of this up in stunningly sleek style, with a highly expressive use of space and showcasing natural locations in the Jaén mountain range – taking in various seasons – that are majestic and dramatic in equal measure. Taking all of this into account, if this film had been in the running for the Golden Shell, it may well indeed have had a shot at winning it.

The Daughter is a production by Mod and La Loma Blanca, with the involvement of Movistar+ and RTVE. Its Spanish distribution is handled by Caramel Films (its release is slated for 26 November) and its international sales are overseen by Film Factory Entertainment.

more about: The Daughter

From 20-23 October, major players in the Spanish film industry will be attending this online event in search of partners, buyers and festival selectors

After Cannibal and The Motive, which took part in previous editions of this festival, Manuel Martín Cuenca returns to lay bare the meanness hidden behind the most obsessive of desires

Filming starts this week on the next project by the director of Marshland, starring the same lead actor, Javier Gutiérrez alongside Miguel Herrán

Icíar Bollaín, Daniel Monzón, Fernando León de Aranoa, Alejandro Aménabar and Paco Plaza, among others, will unveil their most recent outings at the festival

Manuel Martín Cuenca is immersed in the production of The Daughter

The provisional 2019 list of general production support for film projects has just been made public; Coixet’s Nieva en Benidorm and Bollaín’s La boda de Rosa are two of the recipients 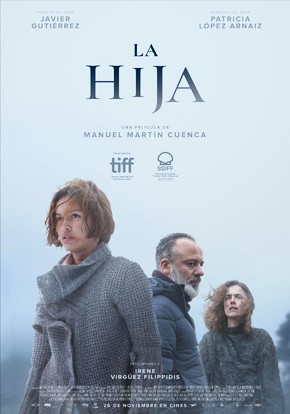