27/09/2021 - The feature debut by Javier Marco, boasting dedicated performances from Emma Suárez and Roberto Álamo, is a sensitive film revolving around a couple of lonesome, wounded animals

Javier Marco (Alicante, 1981) scooped the Goya Award for Best Short Fiction Film at the most recent edition of the prizes handed out by the Spanish Film Academy, for Face to Face, 14 minutes of hard-hitting narrative that depicted the tense encounter between a woman (Sonia Almarcha, who appears in a supporting role in The Good Boss [+see also:
film review
trailer
film profile]) and the man who has been savagely tearing her apart on social networks (Manolo Solo, who pops up in Fernando León de Aranoa’s film as well as in Marco’s feature debut), in the hope that, this way, with no screens to separate them, he will be brave enough to tell her to her face the same things that he spewed out so cruelly on the internet. Now, the prolific filmmaker makes his feature-length directorial debut with Josephine [+see also:
trailer
film profile], a film that passed through ECAM (see the news), premiered in the New Directors section of the 69th San Sebastián Film Festival and, like the aforementioned short, tells a story about withdrawn characters, through slick dialogue and everyday situations.

Thus, although its storyline is simple, the unhurried and subtle psychological depth of the plot is highly convincing: Juan (Roberto Álamo), a shy civil servant employed in a prison, meets Berta (Emma Suárez), a woman who regularly visits her son in the jail where he works. Gradually, and building on a foundation of lies and concealment, the man timidly starts to talk to her, and something akin to a supportive and empathetic friendship blossoms between them.

With these extremely simple narrative strands, Marco and his sidekick, screenwriter Belén Sánchez-Arévalo, have constructed a film that – while relying on its cinematography featuring washed-out colours and minimally photogenic locations – is carried by the delicate work of its actors and by dialogue that, in its countless silences, harbours a great deal of significance and gradually lifts the veil on the protagonists’ shortcomings. We can thus only praise the work of the whole cast of performers, that collective framework on which Josephine is solidly erected. These range from Suárez, who once again breathes life into a long-suffering mother, after also doing so as Pedro Almodóvar’s Julieta, to Álamo, demonstrating that he is able to bypass his physical strength to become a defenceless, fragile animal in need of tenderness.

In addition, Josephine lays bare the helplessness of those people who are unable to aid their loved ones, trapped in a situation to which they are denied access (in this case, behind the bars of a prison cell), the lies we construct to achieve a given (romantic) goal, broken homes and emotional shortcomings. Marco portrays all of this with simplicity, a certain sadness (plus slight touches of humour: the use of the slogans that we see printed on the sachets of sugar is especially entertaining) and enough fondness for his characters for the whole interlacing storyline to be believable and relatable, even though he allows himself a few gratuitous licences in the plot. Nevertheless, this does not detract from the harmonious whole, which confirms him as a mature storyteller, capable of offering us great works in the years to come (as it happens, he already has a feature based on his successful Face to Face in the works).

Josephine is a film staged by White Leaf Producciones, in co-production with Hoja en blanco AIE, and in association with Featurent. It is distributed in Spain by Super8.

The feature debut by Javier Marco, boasting dedicated performances from Emma Suárez and Roberto Álamo, is a sensitive film revolving around a couple of lonesome, wounded animals

Icíar Bollaín, Daniel Monzón, Fernando León de Aranoa, Alejandro Aménabar and Paco Plaza, among others, will unveil their most recent outings at the festival

Introduced for the first time this year at the 16th Seville European Film Festival, the event promises to become a new highlight of the programme for industry professionals 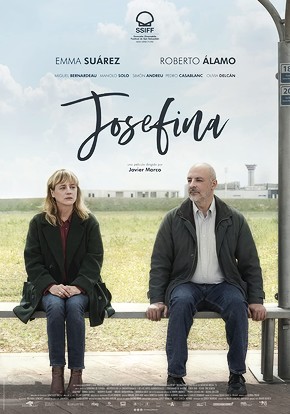