28/09/2021 - Aleksandra Terpińska’s film is everything one would expect from a debuting director: a fresh, funky and dark tale of modern society existing in the shadow of capitalism

Jacek Beler and Sonia Bohosiewicz in Other People

The disclaimer placed in the opening credits of Other People [+see also:
interview: Aleksandra Terpińska
film profile] warning the audience about disturbing content is a fair and smart move on Aleksandra Terpińska’s part. Her film is both dark and delightful, steeped in sad, pale hues. It’s repulsive and alluring at the same time. It also has an amazing rhythm and pacing, thanks to the efforts of Magdalena Chowańska, deservedly presented with the Best Editing Award at the recent Polish Film Festival in Gdynia (see the news). In fact, the commendable work of the entire visual team – DoP Bartosz Bieniek, costume designer Weronika Orlińska and production designer Anna Marzęda – should be mentioned here as well.

Terpińska, whose short Best Fireworks Ever was presented in 2017 in the Cannes Critics’ Week, won the Best Directorial Debut gong in Gdynia for Other People, and rightly so. Her movie is an awesome and crazy portrait of a society that existed in the early days of capitalism and consumerism, which still fuel daily struggles and fears to this day. The story revolves around twentysomething man Kamil (Jacek Beler, named Best Actor in a Leading Role at the Polish Film Festival), who lives in a messy high-rise, and Iwona (Sonia Bohosiewicz), a rich, bored housewife who hires him for some manual labour. They become lovers, which constitutes a modern-day mésalliance, and when they’re apart, Terpińska introduces the audience to a mob of supporting characters: Kamil’s family and girlfriend, Iwona’s husband, and a PTA group, among others. Their story is told by a narrator (Sebastian Fabjański), a hip-hop performer sporting a Jesus-style crown of thorns on his baseball cap. He gets into the heads of the lead characters, but so do the titular other people – neighbours, commuters and passersby, who form a sort of modern incarnation of a Greek chorus, voicing the inner anger and frustration of the protagonists.

No one in this world is happy. They live in chaos, constantly trembling with a very specific kind of anger typical in Dorota Masłowska’s work – she is the author of the novel of the same name that the script is based on. Indeed, these are things that have already been presented in her previous novels and their film adaptations (Snow White and Russian Red [+see also:
trailer
film profile] by Xawery Żuławski and No Matter How Hard We Tried [+see also:
film review
trailer
film profile] by Grzegorz Jarzyna). The image of society that appears here is dark, pessimistic and grotesque, and so is the vision of the world as the board of a zero-sum game; however, the film is mesmerising, like watching a reflection in a hall of mirrors. Terpińska’s debut grabs your attention and provides a strangely guilt-ridden pleasure, since all of the characters in Other People are just like all of us, only a little more twisted, shrunk or magnified.

This grotesque, dark, hip-hop ballad has only one flaw, albeit a serious one – its fast pace combined with the dense, often rapped, lines may make it difficult for a non-Polish audience to follow. This should not, however, discourage anyone from trying to watch Other People and immerse themselves in this pale world lit only by the fluorescent lights of shopping malls and the neon signs of McDonalds and other brands.

more about: Other People

"Polish cinema's international presence is very strong, and I am certain it will remain so"

At New Horizons, Cineuropa talked with the head of industry about the latest edition of the event and what Polish cinema will bring in the future

Aleksandra Terpińska’s film is everything one would expect from a debuting director: a fresh, funky and dark tale of modern society existing in the shadow of capitalism 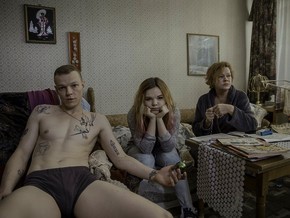