The legendary TV series that sprang forth from the feverish mind of that eternal genius of television (and of film: lest we forget his brutal The House That Screamed and Who Can Kill a Child?) Chicho Ibáñez Serrador did not need a remake, as its narrative audacity and imaginative mise-en-scène continue to enable it to ooze a strong sense of unease and a power of attraction, even today. But one thing’s for sure: younger generations of viewers would never have known about it – and may even have rejected it, given that the episodes were shot in old-fashioned black and white, and were staged rather theatrically – if it weren’t for four Spanish filmmakers who have reinterpreted it today. The result, these new instalments of Historias para no dormir [+see also:
trailer
series profile], have been presented at the 54th Sitges Film Festival.

Let’s proceed episode by episode. The first one is called La broma (lit. “The Joke”), and is the most verbose and tragicomic of them all. Written, edited and directed by Rodrigo Cortés, it is toplined by Eduard Fernández (who has just appeared in Mediterráneo [+see also:
film review
trailer
film profile]), who has a whale of a time playing a guy who cracks jokes like there’s no tomorrow and who is unhappily married to Elena (Nathalie Poza, the winner of a Goya Award for Rosa’s Wedding [+see also:
film review
trailer
film profile]), who in turn is having an affair with Alberto (Raúl Arévalo, soon to grace screens in El lodo [+see also:
interview: Iñaki Sánchez Arrieta
film profile]). When the two lovers try to do away with the cuckold, everything will get grotesquely complicated, as is to be expected in a series where monsters take on the form of human misfortunes.

Another Rodrigo (Sorogoyen) has penned – together with Daniel Remón – the screenplay for El doble (lit. “The Double”), the most schizoid of the four episodes. It stars Vicky Luengo (Riot Police [+see also:
series review
interview: Rodrigo Sorogoyen
series profile]), stepping into the shoes of an actress who has a stormy relationship with Dani (David Verdaguer), an insecure man who buys an android that’s the spitting image of him so that it can stand in for him at certain moments (although we don’t really find out why). As he did previously in his segment of At Home (see the news), the helmer behind Stockholm [+see also:
film review
trailer
film profile] still demonstrates his obsession with the complexities of romantic relationships and here, albeit briefly, offers Verdaguer the chance to flaunt his enviable dancing skills. Set in a dystopian future where we wear face masks with designs from outer space, and making the most of Madrid’s modern architecture, it could very easily be plucked straight from the series Black Mirror.

Freddy by Paco Plaza (boasting a script he wrote himself together with Beto Marini) is the most original episode of the four, as it unfurls a story where Chicho Ibáñez Serrador himself – whom some called the Uruguayan Alfred Hitchcock – appears as just another character (played by Carlos Santos) who, in order to tease out the best (and the worst, naturally!) in a shy actor (Miki Esparbé), gifts him a devilish puppet that will express what the poor fellow is keeping secret, much like a ventriloquist’s doll. This is also the sexiest episode, thanks to the presence of the radiant Adriana Torrebejano.

And lastly, El asfalto (lit. “Asphalt”), directed by Paula Ortiz, is the most surreal of them all (although it does bring to mind As Luck Would Have It [+see also:
film review
trailer
interview: Álex de la Iglesia
interview: Álex de la Iglesia
film profile] by Álex de la Iglesia, who’s a self-confessed Chicho superfan). A home-delivery cyclist (played by Dani Rovira) is already unfortunate enough to be doing this particular job, and now, to cap it all, he has a particularly bad afternoon when he gets trapped in the actual ground of the city, which slowly engulfs him, much to the laughter, indifference and morbid fascination of his unsupportive and unhelpful fellow citizens. It’s a scathing critique of how selfish we are and have been ever since Chicho made the original decades ago, with his own father in the lead role.

Historias para no dormir (season 1) is a production by ViacomCBS International Studios (VIS), Prointel and Isla Audiovisual for Amazon Prime Video (which will release it in Spain on 5 November) and RTVE.

more about: Historias para no dormir 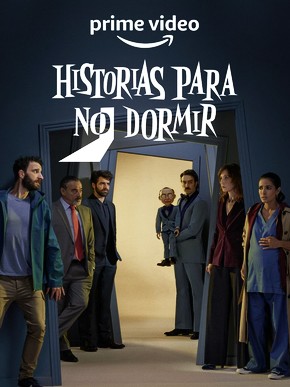