19/10/2021 - The millennial protagonist of Tijana Zinajić’s film struggles with motivation, inspiration and menstruation

Jure Henigman and Liza Marijina in Bitch, a Derogatory Term for a Woman

In social sciences, many theories have already emerged about millennials: who they (generally) are, what they (generally) want and how they (generally) live, many of these put forward by the members of the millennial generation themselves. Several of these theories are based on a claim that the current generation of young people has fewer opportunities and more distractions than previous ones, so they need more time to figure life out and find their own, authentic voice. Cinema-wise, millennials have found their artistic voice at a different pace depending on the national and cultural context. For film enthusiasts among Slovenian millennials, the landslide victory of Tijana Zinajić’s Bitch, a Derogatory Term for a Woman at the 24th Festival of Slovenian Film (see the news) might be good news, since it could be described as a snappy, sometimes manic millennial dramedy.

Our protagonist, Eva (Liza Marijina, of Half-Sister [+see also:
film review
trailer
interview: Damjan Kozole
film profile] fame), is not at a great place in her life: she drinks, smokes and curses a lot, and occasionally does drugs. She struggles to find the motivation to do her job at a book shop specialising in chick lit and to find inspiration as a fledgling painter. Her best friend and flatmate Nina (Anuša Kodelja) is about to carry out her threats to emigrate to Berlin, which has been on the cards for years. Her other best friend and flatmate, whom she is secretly in love with, small-time pot dealer, couch philosopher and art critic Blaž (Tosja Flaker Berce), is in an on-again-off-again relationship with Mateja (Lea Cok), whom the rest of the gang find stupid. Eva is also stuck in a relationship with the mentor of her painting group, Jakob (Jure Henigman, deliciously sleazy), who is married. She and her flatmates are about to be evicted from their flat by the owner owing to unpaid rent, and on top of that, her period is late for apparently no reason. Can she ever move on from the point she seems to be stuck at?

In her free-flowing script, Iza Strehar tries to paint the confusion in the life of a (stereo)typical millennial, while she also aims for laughs by plucking particular situations straight out of sitcoms and inserting the B-word into the lines of dialogue as a swear word. Not all of the jokes feel organic or land that well, but they keep things moving. For her part, Tijana Zinajić does her best to sport music-video aesthetics by employing some striking production and costume design by Neža Zinajić and Matic Hrovat, respectively. The director does not even shy away from steering the film completely into music-video territory on some occasions, but the intended contrasts with the darker parts do not work that well, so the need for a “relaxation” of this kind is questionable.

The film’s best asset is definitely Liza Marijina’s performance. She demonstrates some good acting instincts, especially when she is tasked with turning up the emotional register from 0 to 100, and also shows some skills in in her interplay with the other cast members, boosting the energy and the mutual chemistry on screen. One could say she goes all-in, but she does so in a smart way.

However, the skills demonstrated in her acting are considerably higher than the risks that scriptwriter Strehar and director Zinajić take in their work, which in the end makes Bitch, a Derogatory Term for a Woman feel like yet another film about supposedly smart people doing stupid things because they feel stuck in life. But in a Slovenian context, this movie aimed at young-ish audiences still feels refreshing.

Bitch, a Derogatory Term for a Woman is a Slovenian production by December. RTV Slovenia, Gustav Film and A Atalanta served as the co-production companies. The film was funded by the Slovenian Film Centre.

more about: Bitch, A Derogatory Term for a Woman

The millennial protagonist of Tijana Zinajić’s film struggles with motivation, inspiration and menstruation 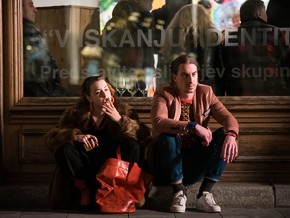 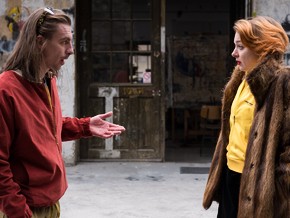