21/10/2021 - In this documentary Adina Istrate and Giannina La Salvia show us not the artist Marina Abramovic, but rather the audiences attending her performances, their thoughts and their reactions

In an animated and interactive Special Session at the 36th Mostra de València – Cinema del Mediterrani Festival, 512 Hours, was screened; a documentary directed and produced by Adina Istrate and Giannina La Salvia, who were also there to present it. While the hook for the film is the artist Marina Abramovic, the brand-new winner of the Princess of Asturias Prize for Arts 2021, the work holds an unexpected and fascinating gem: it shows the reaction of the audience to one of Abramovic’s original performances.

The action is taking place at the Serpentine Gallery in London in 2014: the world-famous Serbian artist receives the public at the door of this local gallery like the perfect hostess welcoming visitors to her home, one by one. They do not know it yet, but they are about to become the very artwork that they have come to see. Because inside, it is empty. They must also disconnect from their mobile devices and connect with their inner selves, something which, in these over-stimulated times, is rather disturbing.

The cameras capture the movements of the audience inside the gallery, vaguely guided by Abramovic and her team of assistants, recording their response to what the artist is doing over the period of time entitling the film: including lying in beds, counting and separating lentils and grains of rice, or a number of minutes when the visitors were bandaged up and also had their sense of hearing taken away. As might be expected, the reactions of each person were extremely varied, strange and … surprising.

At the same time–and this makes up most of the film–another camera is used to interview visitors to this experimental performance in search of connection between human beings: the audience describe what they felt against a plain white background. This is where the most interesting part of the film is found: how the action of an artist affects each person, in a deep emotional and even revolutionary way. The artist’s assistants and even her bodyguards also talk about their impressions of this immersive and empathetic experience that deserves to be seen and enjoyed by many more people that those who visited that London gallery over the 64 days that the…let’s call it a show… lasted., all of them then becoming extensions of Abramovic herself.

512 Hours is an joint Italian, British and US production by The Blink Fish, Toybox Film and Flybird Films. International distributions are managed by Film Republic.

In this documentary Adina Istrate and Giannina La Salvia show us not the artist Marina Abramovic, but rather the audiences attending her performances, their thoughts and their reactions

Featuring 10 films and running alongside Hong Kong’s Filmart, the project developed by Film Republic and EastWest is mixing VR and AR to welcome its guests 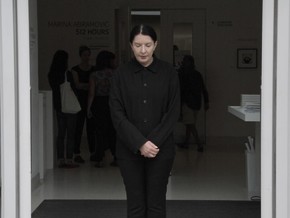